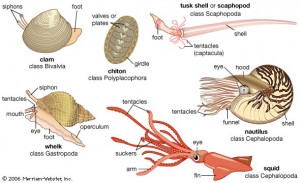 Mollusks are a widely known phylum of creatures that have many different names all around the world. Take a common mollusk here in the United States, the squid. In english it is squid, in French it is pronounced calamari, while in Japan the word is iika （いか）. The reason why there are so many different names for this creature is due to the ecology of most mollusks including a large distribution around the whole world. Of course ecology doesn’t only include the distribution of a species it also includes the interaction between two species. When looking a large phylum such as molluska it is easier to talk about interactions and distribution by breaking the phylum down by the classes it contains. 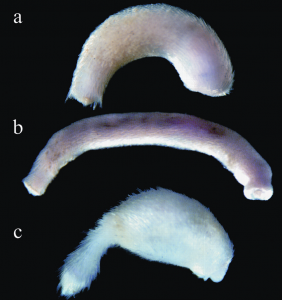 The first class is Caudofoveata. This class in comprised of worm like organisms that do not have a shell but instead use scales as a protective coat. Caudofoveata live on sea beds any where from 200 to 3,000 meters below the sea surfice. These are mainly marine organisms, but have a wide range in locations around the world. As for species interactions it is important to note their placement in the food web. They are a small species that get consumed and help sustain many larger and better-known organisms, such as fish and other mollusks. Caudofoveata them selves interact with other small scavengers because their main food source is detritus on the sea floor. 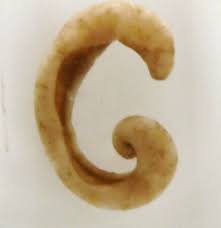 Solenogastres are another worm like organism that also have no shell but are instead covered in calcareous spicules. They use these spicules as defense against their many preditors. They just like the Caudofoveata live on seabeds in only marine environments. However unlike their closest relative the Caudofoveata these mollusks are predators that hunt for their prey. Solenogastres primarily feed on cnidarian and ctenophores. Unlike most of the other classes in phylum molluska these animals do not use their radula (scraping tongue) to eat. They instead suck out the body fluids or just eat the external tissue of their prey. 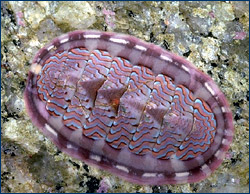 Most people know Polyplacophora by their common name chiton. These organisms are found in rocky tidal zones and seabeds. Chitons are a fully marine class that can normally be found close to the surface but can also live as deep as 6,000 meters below water level. These living conditions are different from bivalves that live in brackish water. Polyplacophora primarily feed using their radula and scraping the flesh of their prey. This is the most common practice for mollusks. Their food sources include: algae, bryozoans, diatoms, and barnacles. Their main food sources are other organisms that live in rocky areas so they don’t tend to move out of their spawning site. However even if that is so Polyplacophora area widely spread species. 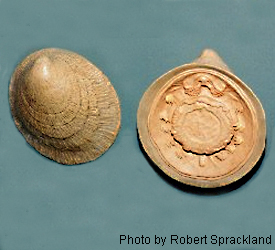 A picture of a Monoplacophora in half

Monoplacophora are an old lineage of small molluscs that have cap shaped shells. These organisms also live on seabeds however unlike with the classes Caudofoveata and Solenogastres these little guys live much farther down. Most Monoplacophora live around 1,800 to 7,000 meters below the water surface. They live on both soft sand sea beds as well as hard rocky surfaces. Unlike most of the other mollusk classes Monoplacophora primarily live along the continental shelf. While their smaller demographic is strange they follow the common mollusk practice of feeding with their radula. Monoplacophora feed on minerals in rocks, sponges, radiolarian fragments, small nematodes, and polychaere bristles. Do to their hard shells they are less preyed on however they still have some predators such as deep-sea fish and crustaceans. 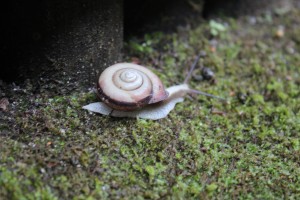 A picture of a gastropod I took while studying abroad in Japan.

Gastropods include some really well known organisms such as snails, slugs, conch, and sea butterfly. Due to this group having such a wide verity of organisms it is the first class on this list to live in many different environments. A Gastropod can live in marine water, fresh water, or on land. While they are widely spread between environments about 2/3 of Gastropods are marine living. This is one of the two groups of mollusks that can be found in water sources any where in the world. Their feeding habits and species interactions also changes depending on the species being looked at. For instance the gastropod Eulimid Thyonciola Doglieli is an endoparasyte that feeds off the blood of their host (normally fishes). Other Gastropods are carnivorous and feed of animals such as: plankton, nematode, and decaying road kill. One member of the gastropod class is a unique feeder, this organism is called Elysia Chlorotica. 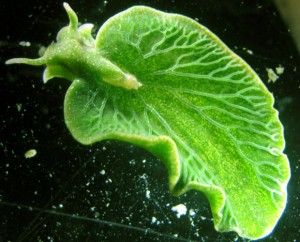 Image of a Elysia Chlorotica

Elysia Chlorotica is an absolutely beautiful slug bodied creatures that resemble bright green leaves in their adult stages. They are mostly found in salt water marshes or tidal pools along the east coast of the US, at the depth of 0meters to 0.5 meters. The reason why these Elysia Chlorotica need to be so close to the surface of the water is because of their unique way of feeding. Elysia Chlorotica feed off specific algae called Vaucheria litorea. Via a process called kelptoplasty they suck the chloroplasts out of the algae and absorb them into their skin. Then when they are in the sunlight they are able to do their own form of photosynthesis. This is a unique form of feeding that no other species in the mollusk phylum can do. It is even rare for their closest relatives in class gastropod because most gastropods are carnivores.

If everyone in the world has heard of one type of gastropod then everyone can name a cephalopod twice over. Some examples of Cephalopods that you might have heard of are: squids, octopus, cuttlefish, and nautilus. All Cephalopods live in marine environments. It is hard to say at what depth these organisms live at because many cephalopods live in deeper water during the day and come up to the surface when it is night. This is due to the nature of their hunting spirits. During the daytime they stay deeper in the water because many of their predators such as birds and humans are on the surface. However during the daytime they come to the surface to eat many of the little fish that come to the surface to catch bugs. Cephalopod and Gastropoda are two of the most widely distributed classes, meaning you can find a species in one of these classes almost every where in the world. With this much spread and diversity it is no wonder there is so many different species in this class. Because of this diversity it is hard to name all the organisms this class eats. If I had to name a few food sources they would be: other cephalopods, crustaceans, and small fishes. These animals also play a large part in our own food web as humans. It is common practice in many places around the world to eat Cephalopods like squid and octopus. 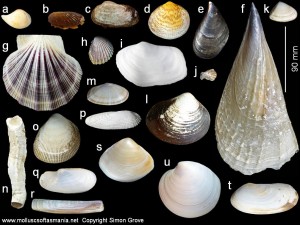 Bivalves are an almost fully shelled mollusk that tend to be shy and hide their entire body in their shells. These organisms live in both fresh and marine waters. They mostly live buried under the sand but some bivalves live attached to rocks and man made objects. Bivalves are a common organism that have a wide demographic in many waterways all around the world. One organism that bivalves have an interesting relationship with is chemo symbiotic bacteria. These bacteria live in the bivalves gills and oxidize hydrogen for the bivalve. The bivalve hosts also absorb nutrients that are synthesized by the bacteria. Bivalves also have an interesting relationship with us humans. We catch and eat these organisms for food however they have caused a couple different illnesses to be spread to humans. A couple examples would be the typhoid out break and PSP (paralytic shellfish poisoning). Both sicknesses are caused by the bivalve eating parasitic or toxic prey such as dinoflagellates. 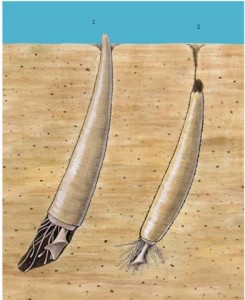 Scaphopoda are animals with tusk shaped shells. This class is a marine only class that lives anywhere from 6,000 to 7,000 meters under the water surface. They live in the sediment on the seafloor. They are a primarily predator class that’s main food source is foraminiferans. They have also been documented as a cannibalistic species. Some species of scaphopoda are vegetarian only and will eat aquatic plants instead.

This entry was posted in Mollusks. Bookmark the permalink.