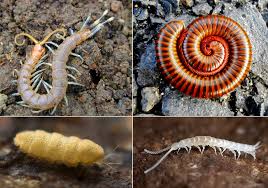 Insect reproduction is a wonderful and disgusting miracle of life. This week we will be looking specifically at the subphylum Myriapoda. This is a subphylum that includes many insects we have around our houses. In particular the organism this week is the class chilopoda also known as household centipedes. We figured out that the unknown organism this week was a centipede by looking up some of its most noticeable features: 2 compound eyes, antenna, and more then 10 pairs of legs. When talking about the different types of reproduction in the phylum Myriapoda it is important to break it down by classes. 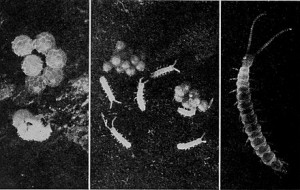 Life stages of symphylans: eggs, juvenile, and adult in that order

The first class to look at would be symphyla also known as garden centipedes. For symphyla their genital opening is on the fourth body segment. This is a relatively common place for genital pores in insects as classes do not have their reproductive organs on the first or last body segment. Garden centipedes do not have penetrative sex or external sex organs at all. However there is still a male and a female involved with reproduction. Instead they reproduce by passing packages of sperm to the female. She picks them up with her mouth and stores the sperm in special pouches for later use. The sperm packets can be left on the ground as well for a short amount of time. If the packet is put in moist place it can survive for weeks. When its time to fertilize the eggs the female symphyla will attach the eggs to moss and lick the eggs to spread the sperm over them. The process of keeping the sperm inside a pocket in the mouth is special for the class symphyla. Many times female centipedes will take multiple partners or even eat their male counter part. These acts of reproduction happen at random however they tend not to bare children during the colder months because it is more difficult to attend to the eggs. 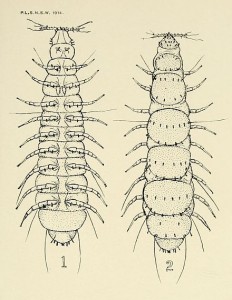 front and back view of pauropoda

The second class is pauropoda, which are small pale millipedes. Most species of pauropoda have two separate sexes. There is one exception to this where one species of pauropoda with no males found. The species that have no male perform a form of asexual reproduction method called parthenogenesis. The more common species reproduce via the male pauropoda who deposits sperm packets on the ground and the female pauropoda take the packets into their genital opening. The eggs hatch and go threw a short pupa life stage between the larva and adult stage. In one species the pauropoda are born with three pairs of legs and then grow more legs after each molt. The amount of legs changing is a rare for this class. 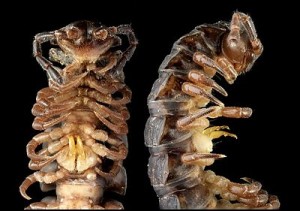 The third class to look at in phylum myriapoda is the Diplopoda better known as the millipedes. There is diversity of reproduction even within the class Diplopoda. For instance the bristle millipedes mate the same way as the other two classes by depositing packets of sperm in webs for female millipedes to get and to hold on to for later. However in other species the males have two pairs of “legs” called gonopods. These are modified legs that are used to transfer sperm directly into the female during sex. There is diversity by species which segment of the body these legs are located on. In female millipedes they have a genital pore that have a hood and allows for sperm to be stored after copulation. Females lay eggs and then deposit the sperm on the eggs afterwards. Many species make nests with moist soil, dried leaves, or lay the eggs in silk cocoons. In many species the mother will lay the eggs and then leave them however some mothers show a great amount of commitment to taking care of their children. 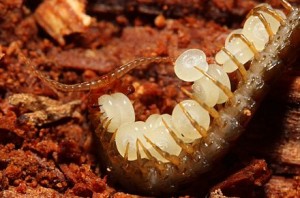 Centipede holding onto her eggs

The fourth and final class to look at are the chilopoda better known as the centipedes. This is the class that our organism of the week is in. Reproduction in centipedes follows the normal routine for Myriapoda where the male leaves spermatophore’s for the females to pick up. Many times the male does a courtship dance to entice the female to pick up his sperm packet. Once again there is diversity in childcare for this class. Some species lay their eggs in a hole and cover the eggs with leaves and soil. However there are amazing acts of parentry including staying and defending eggs as well as allowing the babies to eat the mother in order to provided sustenance. Many mothers will stay with the eggs and lick them in order to fight off common fungi that attach to eggs. Another factor of reproduction that is highly variable are development ages. For some species like the S. Coleoptrata they can reproduce after 3 years while other species can do so in just 1 year. A unique fact for the centipede is if a nest is disturbed the mother will either abandon the eggs or eat them and try again in a new location. 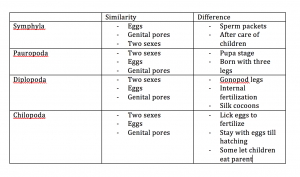 This entry was posted in Myriapoda. Bookmark the permalink.