BOWLING GREEN, O.—Audiences will have a chance to celebrate Halloween in a uniquely scary way this year and experience the film “Frankenstein” as never before.

The Festival Series event will feature a screening of the 1931 Boris Karloff film with a new musical score played live by BGSU music faculty members. It begins at 8 p.m. Oct. 31 in the Thomas B. and Kathleen M. Donnell Theatre at the Wolfe Center for the Arts.

Cashbox Classical Music Editor Rob Tomaro said of a previous performance, “The audience was riveted to their seats. The power of the live music with the classic film was hypnotic.”

Audience members are invited to dress up in costume. There will be a costume contest, with three winners selected before the concert and awarded prizes.

“When the Film Society of Lincoln Center opened an adjunct theater in Westchester,” Shapiro recalled, “I spoke to executive director Steve Apkon about doing a joint project during their opening season with my orchestra and the theater. During our discussion I offered to write a film score for ‘Frankenstein’ that would be played simultaneously with the 1931 film by live musicians,” he said.

The original picture has spoken dialogue, qualifying it as a “talkie,” but no musical score, Shapiro explained. The technology did not exist in 1931 to have a separate music track on the film, he said, adding that the first through-composed film score was Max Steiner’s “King Kong” in 1933.

“Writing for a ‘talkie’ with a simultaneous live score is in many ways a new art form, so it’s tremendously adaptable and exciting to do,” Shapiro said.” He also noted that live orchestral performance with film attracts a new audience to experience this hybrid medium.

“I love writing music that has a dramatic impulse,” he said. “I thought of this Frankenstein score as almost a one-act opera … but instead of writing music to move singers across a stage, I thought of moving actors through their dramatic action, commenting on what is being portrayed emotionally by (director) James Whale in his masterpiece.”

“I try to write music in every form that gets under the listener’s skin,” Shapiro said.

There is no intermission for the performance. The audience is invited to a special after party at The Melt Shoppe in downtown Bowling Green.

Tickets are $12 for the public and $5 for BGSU students and can be purchased online at bgsu.edu/arts or by calling the Arts Box Office at 419-372-8171

A College of Musical Arts Residency was featured by the Sentinel Tribune. 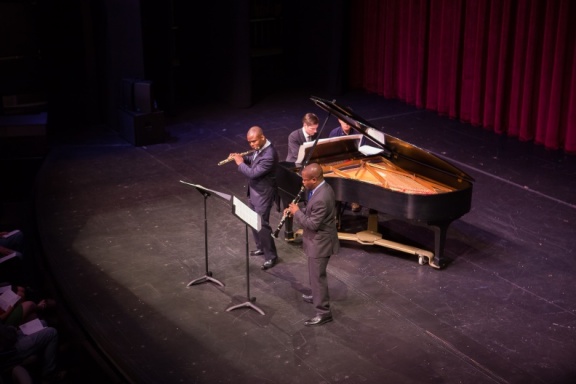 BOWLING GREEN, O.—Hearing classical musicians Anthony and Demarre McGill in performance, it is hard to conceive that they were born and raised on Chicago’s tough South Side. The brothers have both achieved stellar levels of success in the world of classical music, Anthony on clarinet and Demarre on flute.

The two will share their art and expertise with audiences and students at Bowling Green State University as artists in residence for this year’s Dorothy and DuWayne Hansen Musical Arts Series. The McGill Brothers will present a free recital at 8 p.m. Sept. 29 in the Thomas B. and Kathleen M.Donnell Theatre at the Wolfe Center for the Arts.

Just named principal clarinet of the New York Philharmonic, Anthony McGill served as principal clarinet of the Metropolitan Opera Orchestra, with whom he has also appeared as soloist. Also at Carnegie Hall, he has appeared as a soloist with the American Symphony Orchestra and the New York String Orchestra. As a chamber musician, he has performed throughout the United States, Europe and Asia, including appearances at the Philadelphia Chamber Music Society and the University of Chicago Presents, and festival appearances at Tanglewood, Marlboro, Mainly Mozart and Santa Fe. He has collaborated with Emanuel Ax, Yefim Bronfman, Gil Shaham, Midori, Mitsuko Uchida and Lang Lang, and on Jan. 20, 2009, performed with Itzhak Perlman, Yo-Yo Ma and Gabriela Montero at the inauguration of President Barack Obama. He has appeared on “Performance Today,” Minnesota Public Radio’s “St. Paul Sunday Morning” and “Mr. Rogers’ Neighborhood.” In 2013, with his brother Demarre, he appeared on “NBC Nightly News,” the “Steve Harvey Show” and on MSNBC with Melissa Harris-Perry.

Winner of a 2003 Avery Fisher Career Grant, Demarre McGill has performed concertos with the Chicago Symphony, Philadelphia Orchestra, Pittsburgh Symphony, San Diego Symphony, Baltimore Symphony and Milwaukee Symphony, among others. He is currently principal flutist of the Seattle Symphony, and has held the same position with the San Diego Symphony, the Florida Orchestra and the Santa Fe Opera Orchestra. An active chamber musician, he is a member of the Florida-based Ritz Chamber Players and has been a member of Chamber Music Society Two, the Chamber Music Society of Lincoln Center’s program for emerging young artists. He has been featured on a PBS “Live From Lincoln Center” broadcast and has participated in the Music from Angel Fire, Santa Fe, Kingston, Cape Cod, Music@Menlo, Bay Chamber Concerts, Mainly Mozart, La Jolla and Marlboro music festivals and has performed on the Ravinia Festival’s “Rising Star” series and the A&E Network series “The Gifted Ones,” and was a special guest on “Mr. Rogers’ Neighborhood.” In addition to his performance schedule, he is the co-founder and artistic director of Art of Élan, a chamber music organization in San Diego that aims to expose new audiences to classical music.

In addition to their recital appearance, both Anthony and Demarre McGill will give master classes and host a special talk and question-and-answer session. See more details on their residency.

The Hansen Musical Arts Series Fund was established in 1996 to bring significant representatives of the musical arts to share their talents with BGSU students and members of the Bowling Green community. Past Hansen Series guests have included Marin Alsop, Branford Marsalis, Terence Blanchard, and Bill McGlaughlin.

In honor of Doug’s many contributions of the College of Musical Arts, donations and gifts will be accepted in support of the Douglas Wayland Chamber Music Competition. For more information, please contact Dr. Bill Mathis, Chair of the Department of Music Performance Studies, at wmathis@bgsu.edu or 419-372-8576. Please visit the calendar for more information.

Program will include musical performances, tributes, and memories