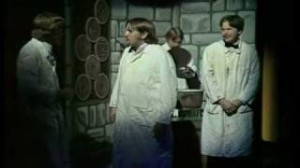 Wallace dePue, a former Barbershopper and former Professor of Music at Bowling Green State University, was the recipient of an award from the Boston Metro Opera  for “Something Special,” a barbershop opera that he wrote in 1976 for the Maumee Valley, Ohio, Chapter show, directed by R. D. Mathey.

Not only were the music original compositions words and music by Wallace, but he had never written barbershop songs or arranged them, so he ran them all through the Society for guidance. He also wrote the complete libretto and lent his help as the show was put together. It was performed with the BGSU Men’s Chorus combined with the Maumee Valley Chorus.