Currently based in Williamsburg, VA, Mark graduated from Bowling Green State University in 2008 with a Bachelor of the Arts in music. He resided in Bowling Green for a year following graduation to teach guitar and perform in his ska / punk band, The Argonauts.

Mark plays two guitar necks at the same time, one with each hand. His style is reminiscent of the late Michael Hedges and draws influence from guitarists such as Leo Kottke, Phil Keaggy and Tommy Emmanuel as well as various punk and indie rock bands.

Mark has been on tour since May, 2010 save a few short breaks for rest, playing concerts or giving clinics every other night on average. Mark plays at bars, coffee houses, listening rooms, churches, schools, house concerts and just about any kind of venue available. He was recently added to the roster of artists endorsed with Ovation Guitars.

Winning the Guitar Superstar Competition awards Mark with a number of prizes including a feature in Guitar Player Magazine and copious amounts of other press. Other endorsements and sponsorships have been offered and Mark has also finalized a partnership with D’Addario Strings and Planet Waves Accessories.

Video of Mark’s winning performance is available at www.markkroos.com.

The last two summers brought singers from as far as Japan, South Africa and France to rehearse, sing and perform together to the BGSU campus for the New York Voices Vocal Jazz Camp. From August 1-7 the 6-day camp will again feature the intense and unique blend of New York Voices ensemble singing and soloist virtuosity in both teaching and performing. In its third year, the multi-Grammy winners return to their BGSU camp to teach and perform with a total of six nights of concerts:

On the 2nd Kinhan and Eldridge will bring their sophisticated sounds to the Bowling Green audience in a joint concert. Wednesday night will include a feature performance by camp faculty and ‘5th Voice’ Greg Jasperse, while Thursday night, Aug. 4th will have Nazarian present selections from her upcoming album as well as a tribute to Mr. Rogers, alongside Meader’s awe-inspiring virtuosity on both the vocal mic and tenor saxophone.

Friday August 5th will feature highlights from select 2011 campers and on August 6th the Camp Ensembles perform at 3:30 pm and then New York Voices live at BGSU will return as the staple music experience of the camp. For more information, please see www.BGSUjazz.com.

Dave “Dak” Melle was a professor of performance studies at the BGSU College of Musical Arts from 1967-95. He directed the Jazz Lab Band from 1970-95 and also performed as flutist with the BGSU Venti da Camera Woodwind Quintet from 1973-92, appearing on campus, in the community, at state and national music conventions and on tour in Belgium in 1991.

The sounds of piano, trombone and jazz combos will fill the air at Bowling Green State University starting March 28 as Jazz Week 2011 kicks off.

Schmidt is a previous Director of Jazz Activities at BGSU and holds degrees from the Eastman School of Music, where he studied with legendary jazz pedagogue Rayburn Wright.

As a performer, Schmidt was one of only two American jazz pianists selected to participate in the second Martial Solal International Jazz Piano Competition in Paris. Among his recent recordings are “Season of Change,” which is his debut release as a leader, “Jazz Vespers,” by Paul Ferguson, and “The Surprise of Being – Live at Birdland” by the Cleveland Jazz Orchestra featuring Joe Lovano.

BGSU students in chamber jazz ensembles will take the stage at the Bryan Recital Hall at 8 p.m. March 29.

On March 30, trombonist Jay Ashby and members of the BGSU jazz faculty will perform as part of the Faculty Artist Series. Ashby is a four-time Grammy Award-winning producer whose resume includes over 100 recordings, ranging in style and genre from jazz and pop to world music.

In recent years, Ashby has performed, traveled and recorded extensively with some of the most renowned artists in the industry. His longtime association with trumpet master Claudio Roditi helped develop his strong affinity for “Brazilian Jazz.” As a member of Dizzy Gillespie’s United Nation Orchestra in the early 1990s, Ashby forged relationships with jazz greats Paquito D’Rivera and Jon Faddis. In 1999, in a testament to his versatility, he began his first foray into the pop world as trombonist, percussionist and arranger with pop music icon Paul Simon.

In an educational capacity, Ashby has conducted master classes, residencies and clinics world wide, including annual events in Germany, Brazil and Russia.

On April 1 at 8 p.m. in Kobacker Hall, Ashby will join the Jazz Lab Band I in a program that will include some of Ashby’s own material and arrangements including “The BGSU Blues.”

All events are sponsored in part by Marlene Norton and Jerry Liss and are free and open to the public. To view a schedule of events, click here. 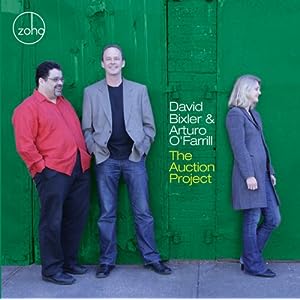