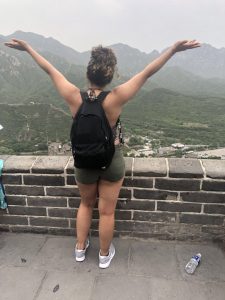 I am currently nineteen years old and unfortunately, before this trip, I had never left the country or been on a plane before. No one in my family has ever left the United States before which made this trip even more like a dream for me. Before college, I had always wanted to leave the country and travel but it never seemed possible. Fortunately for me, this trip was. I was reached out to regarding this trip because it is considered as a business course (BA 4390) and at first I was a little uneasy.  After speaking to the instructor, Dr. Zhang, what felt impossible became possible. When deciding how long to stay, there were two options. The first option was to take only the 4390 course and stay for only two weeks and the second option was to stay for a whole month and intern for the second two weeks. The internship also counted as a three credit business course. After a few weeks, I decided to stay a whole month. I thought that it would look great on my resume to say that as an international business student, I travelled to china and completed a two week internship there. Deciding to come on this trip has been a great experience and I am so happy that I came. Before coming on this trip I was very scared and nervous. I had to pay for the trip myself, so I was worried financially. I missed my best friends wedding and my cousins graduation. Most of all, I was terrified to fly on a plane. I can honestly say that after being here for three weeks, all of these sacrifices and worries were all worth it in the end. 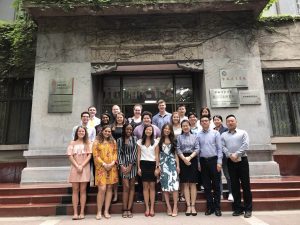 After a very long and stressful flight, we finally made i to Xi’an, China. I began my journey at 6:00 am as I headed to the airport. There, I was surprised by my boyfriend of five months who surprised me with flowers and a card. I had not seen him in a very long time and the fact that he drove all the way from Cincinnati to Cleveland Hopkins Airport meant the world to me. Suddenly all my worries went away and I finally felt excited for this trip. The first flight was a walk in the park but the second flight from Toronto to Beijing was unbearable. The food was inedible and the seats were very uncomfortable. Thankfully, the plane did offer movies for us to watch and a charger. I kept falling asleep and waking up in the hopes that we would be close to our arrival but every time we were still hours and hours away. Even after we got to beijing, we had one more flight to get to Xi’an. We were so close to getting there but then we missed our flight. We then gave up and all laid down on the airport floor as our instructor tried to figure something out. It seemed as though we would never get there. Eventually though, we did make it. We settled in our hotels and then woke up bright and early to head to the opening ceremony. At the ceremony we introduced ourselves and were given a little bit more information about the trip. We then took this photo and began exploring the beautiful land of Xi’an, China. 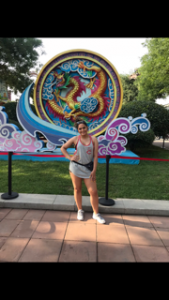 I really enjoyed exploring Xi’an, China on our own as well as a group. Our instructor had an itinerary full of plans for us during the first two weeks but she did also give us some freetime. We all were given language partners who were chinese students who understood english. They helped us during our stay and also became our friends. During the first few days, a few of us along with our language partner, Wendy, toured the heart of Xi’an. It was beautiful. There were many statues and works of art. At night, the city was very alive. The streets were full of bright, colorful lights and many people. 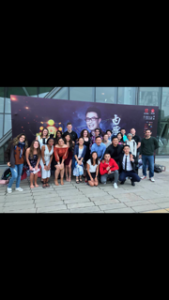 After a day filled with events, we were invited to go watch the Chinese opera/ television show, “The Voices of China.” This show was similar to the voices in the United States and is very important to them. Somehow, we ended up getting very nice seats in the front rows and we were on television. The opera was very interesting to say the least. Many chinese people have never met an American before so they were wowed when they saw us and took many photos of us during the whole trip. Although it was flattering, it did start to get a little old at some point and frustrating. At the opera, there were many photos of us taken and it felt like paparazzi. We were told the opera was only going to last for an hour but it ended up being four hours so we left early due to all of us not eating dinner yet. We soon discovered that what we did was insulting and disrespectful but the dinner after was worth it. I struggled to enjoy the food here so fortunately, they did have a sbuway. mcdonalds, kfc, and pizza. 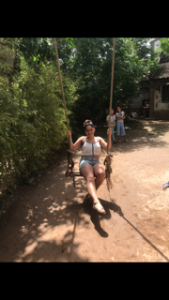 On this day, we toured the yuanjia village. This village was not any ordinary village/ It was full of people, shops, food, and it even had a swing and kids amusement park. The amusement park was very small but it had kid rides and bumper cars. It was a very fun filled day. Later that day, we learned a fun fact. Making 3 billion yuan per year which is about 480 million USD. When asked how this was possible, we were all clueless. Dr. Zhang then informed us that the village is communistic and so everyone who lives in the village specializes in one product. One food they are really good at cooking or one product they are very good at making/selling. Every villager then puts their money in a pot and they split up equally. If a person is not selling as much as they should, they are then kicked out of the village. 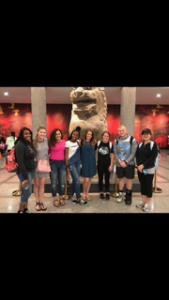 This picture was taken at one of the many museums we attended. I am not a huge history person and the only museums I enjoy are art museums so I did not enjoy this part as much as others. I did learn how important chinese culture and history is to many people in China. Even though these were tourist places, the museums were filled with natives. 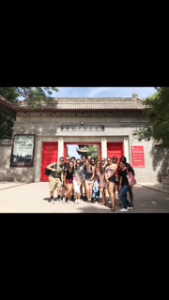 If I am being honest, I do not remember where this photo was taken. We explored many places and the majority of them mix together to me. I do remember this place being very beautiful and also very hot. I also remember eating some delicious McDonalds here for the first time in China. The menu was similar but had a few more strange items added on. The cheeseburger tasted the same except the cheese tasted kind of funny but nonetheless it was edible. 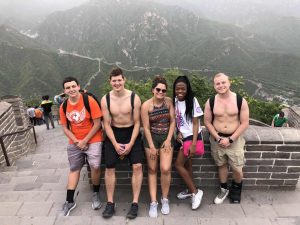 This day was an eye opener to just how out of shape I am in. When you go to China, you must climb the Great Wall of China, right? On our way to the Great Wall, I had no idea what to expect but I told myself that I was going as far as anyone else went and I would make it to the top. After taking a few steps, I started to lose hope as I was already out of breath. I pushed myself and took very long breaks in between but eventually, I made it. I felt very proud of myself. Only five out of the 14 people students in our group made it to the top and I was on of them. Walking down was much easier and the breeze felt very nice. The view was beautiful at the top. 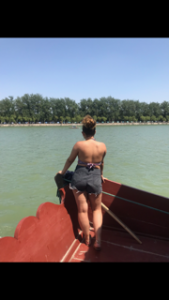 One of the places that we went in Beijing was the summer palace. The place was very beautiful. It was a very nice place to take many photos. At the end of our visit, we all pitched in some money to ride a boat over the water to get to the other side. It was a very pretty sight. 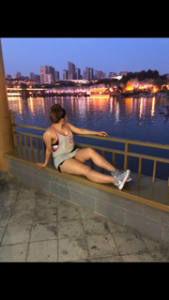 \This trip was very influential to me and taught me a lot of things. It made me very thankful for the luxuries that we have in the United States. I am thankful for our western toilets, drinkable water, wifi, and cleanliness. Many things shocked me like children using the restroom outside in front of everyone and older people being very rude by cutting lines. I was also shocked by the lack of gloves used to cook food or washing hands after using the restroom. Nonetheless though, this was a great experience and I highly recommend that everyone travels sometime throughout their college career. This trip has taught me that I really do want to travel and gave me the goal of traveling to every continent at least once. I have already started looking into study abroad opportunities for next summer.