Traveling To Get There

Our trip started bright and early at 7am in the Cleveland airport. I remember being both really excited and really nervous. Beyond talking a bit at meetings I knew no one on the trip and I was about to travel around the world with just these people. 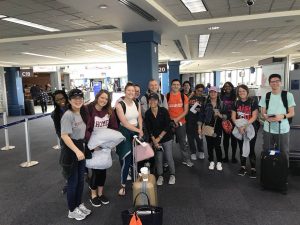 We made it to Toronto rather easily and through our flight to Beijing was long and very turbulent we arrived in Beijing a little tired and very culture shocked. Due to a miscommunication and just travel taking time we missed our second flight to Xi’an and waited in the airport, laying and sleeping on the ground, seemingly to the amusement of many Chinese travelers. Luckily Dr. Zhang was able to get us another flight and soon we exhaustedly arrived in Xi’an. 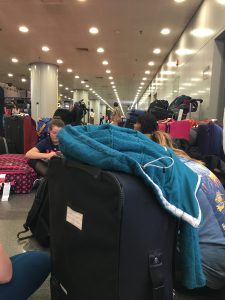 We arrived at our hotel at about 2am but most of us were too excited to sleep talking and looking around until about 4. The next morning we had the opening ceremony for our program which led to another moment of culture shock when the entire opening ceremony was conducted in Chinese until the trip director realized none of us spoke it. After that, we had our first of many amazing meals. For me, it was particularly amazing because I could actually eat all of the food unlike in America due to my food allergies. The way it was served was different too all the food family style on a turntable in which everyone eats out of the same bowels with their chopsticks. Also, it was interesting for us because most places only served hot tea with meals if you wanted a cold drink you had to bring it or buy it yourself. While this picture isn’t from this specific meal it is a good example of the food we ate. 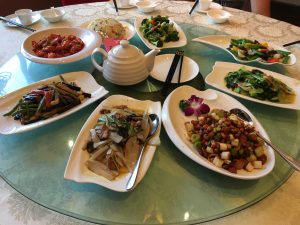 After this meal, we got to go on our first of many sightseeing adventures. First to the city wall of Xi’an, then the Muslim district, a set of winding streets full of open-air vendors, selling anything and everything. It reminded me of how I pictured the silk road, which is especially appropriate given Xi’an is the start of the silk road and the Muslim district was created because of the silk road. In the Muslim district, we also got fish therapy, where you put your feet into a tub of fish that slowly eat the dead skin off. I had done it before in the states but was really surprised by two things, how much cheaper it was here, and how much more effective it was. Our night was actually finished up at KFC as we needed to go there for a project. 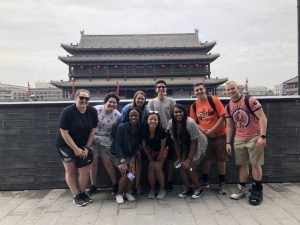 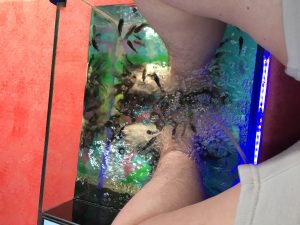 The next couple days were a whirlwind of culture classes, amazing meals in the cafeteria, and exploring the city on our own. On one of our adventures, we found the biggest mall I’ve ever been to. Oddly enough it had trees on the roof. As far as classes we took a painting class, a language class, a tea class, and many others.

Our first weekend we went to do even more sightseeing. One of the things I was looking forward to the most was seeing the terracotta warriors. I can say they definitely lived up to the hype. It’s so expansive as soon as you walk into the first pit you will be overwhelmed. After that, we had what we thought would be a 1-hour opera show after which we were supposed to eat dinner. It turned out the be the Chinese version of the voice which was cool but also became an issue when it was pushing 11 at night and had been 12 hours since we had eaten. We ended up trying to sneak out but as the only Americans in a huge crowd in something on live television with door guards that was easier said than done.

After this, we had another week of classes which included going to the free trade district and a few nights going out with our language partners. We also graduated from our program.

Then we took the bullet train to Beijing. Honestly, I can say the bullet train is a better form of travel compared to planes because it’s very fast but you can still use your phone and have much more space.

We arrived in Beijing pretty late at night so instead of dinner, we tried out Mcdonald’s delivery service which was pretty cool (and unique to China). The next day we had to get up and get ready early though as we had a day full of sightseeing. First, we went to Tian’anmen Square and then the Forbidden City. Going into both you could see many many crowd control measures, the city planning was rather impressive. After this, we took a rickshaw and saw a circus/variety show which was especially interesting as it was all in Chinese which we don’t speak.

The next day was very exciting because it was the day we went to hike the Great Wall. I didn’t realize before getting there how much of a hike it would be. Slow but steady we made it up, the other thing that made it a bit more challenging was the stairs are all the original stairs so they aren’t the evenest. Some were half a foot, some were two feet.

On our last full day, we went to the Temple of Heaven and the Summer Palace. They were both absolutely gorgeous and one thing I noticed here but also at all the historical sites we went too, so many people in China are really passionate about their history in a way I haven’t really seen in America. At this point we were all pretty exhausted and a little sunburnt but still very excited to be there.

The next day we packed up and headed for our long journey home. While at this point I was ready to go home I’m very excited to go back in the future.