This blog shares my experiences while studying abroad in China. Dr. Man Zhang, an international business professor at Bowling Green State University, led 15 students including myself to Xi’an and Beijing to learn and experience Chinese business and culture. We spent a total of 14 days in China. In these 14 days, we attended Shaanxi Normal University that provided us with many cultural courses to broaden our understanding of China. In addition to attending Shaanxi Normal University, we attended many museums, performances and restaurants. I have compiled many highlights from the trip and hope it will inspire you to someday visit China. 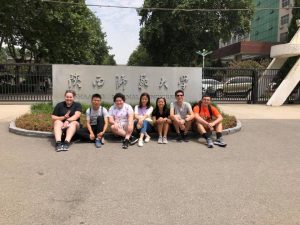 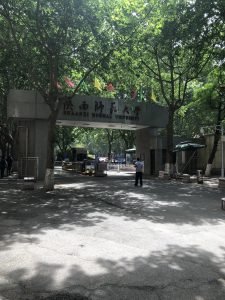 For our stay in Xi’an, we stayed at the Shaanxi Normal University campus hotel. Campus had an array of landscaping, particularly trees, to protect everyone from the sun while sitting outside. There were also many courtyards that provided seating and scenic views. Across from the hotel was a convenience store, which came in handy for late night snacks. The campus was gated and guarded to protect the students of Shaanxi Normal University. Student life on campus is much different than here in the United States. Students have a structured schedule throughout the day, and everyone eats lunch and dinner in the large two story cafeteria, which had numerous options for food, at the same time. At the end of the day, everyone was checked into their dorms at 11pm.

During our stay at the university, we were provided a language partner that would help us diminish the language barrier. The language partners took time out of their schedules to help us get acclimated to Xi’an and the Chinese culture. Most of us were visiting China for the first time. They were always very helpful, especially when bartering with shopkeepers in the Muslim District, we had to be sure to get the best deals on souvenirs to bring back home. However, they became more than language partners, they are life long friends we will all hold dear to our hearts. They were a big part of, and helped us create, some of the best memories from China. We all hope they can one day come to America so we can be their language partner. 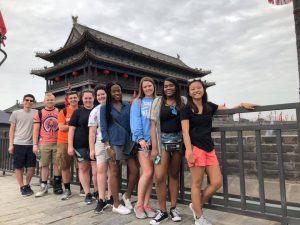 Some of us had the opportunity to go up on the Xi’an City Wall. It has which has scenic views of all of Xi’an. The wall is 40 feet high, 50 feet wide, and 8.5 miles long, and was a military defense system during the Ming Dynasty. Today, the wall mainly serves as a tourist destination. On top of the wall, there are souvenir and coffee shop, along with bike rentals to draw in business and foot traffic. 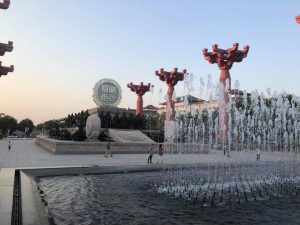 While in China, our language partner Chen took us to the Wild Goose Pagoda. This area was full of restaurants, shops, and theaters. It was a great place for a all-day adventure. There were many street dancers, musicians, and statues of Chinese culture. The mix of modern architecture and traditional Chinese architecture made it appealing to all demographics and drew in many locals and tourists, making it a business hotspot. 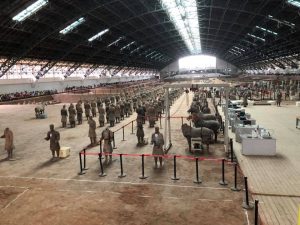 A must see museum in Xi’an would be the Terracotta Warriors which we had the opportunity to visit during our short time in China. The Terracotta Warriors were found by a man named Zhao Kangmin. He came across them when digging for a well in 1974. These clay warriors were made to protect the Qin dynasty emperor in his afterlife. The Qin dynasty was the first dynasty in China which means this is the tomb of the first emperor of China, Qin Shi Huang. Though the warriors may look the same in photos, all 8,000 warriors have a distinctive face. 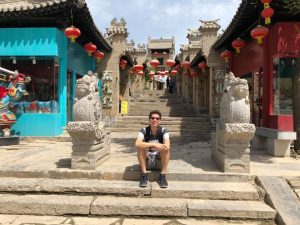 We also visited the Yuanjiacun village. This villages grosses 3 billion dollars in revenue each year. Each family in the village has a one specialized product that they produce. For example, one family would specialize in making chilli powder.This means, that is the only product they make throughout the year. Being apart of the Village, all of the revenue earned from their craft goes into the village fund. The fund is then spent on more raw materials to produce more goods that families specialize in. In the village, if one family is not bringing in enough revenue and contributing, they are booted from the village. This economy is very different from capitalist America, but they are the wealthiest village in China. 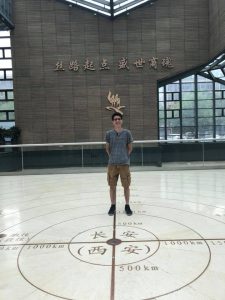 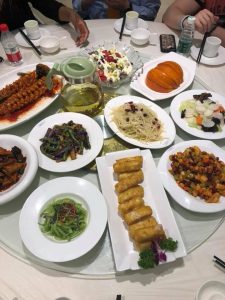 Food was served family style on a lazy susan. Fortunately when we ate, our food was pre-ordered and we were surprised on what was being served. It gave everyone the opportunity to try a variety of foods. Every meal we ate was eaten with chopsticks. We all became very comfortable and skilled in using them by the end of the trip. At all meals, tea was served as a drink because in China they prefer traditional hot drinks over cold drinks. 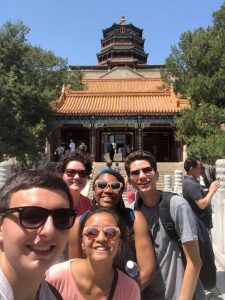 Summer Palace was an imperial garden in the Qing dynasty. We climbed to the top and it had an amazing view of all of The palace and Beijing. Going up to the top of the Palace was an extra 10 yuan, but it was worth it. We also took a boat ride across Kunming Lake. 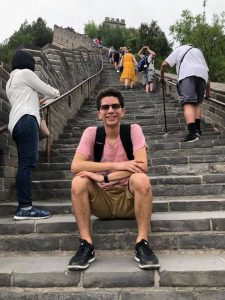 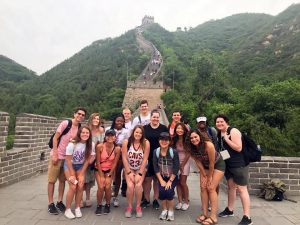 I am so grateful to Dr. Man Zhang for choosing me to be apart of this trip. It was an amazing experience and if I am given the chance I would love to go to China again. I would encourage anyone that has the opportunity to travel to China to go because Chinese people are very passionate about their culture and history and want to educate tourists as well.