One day in economics class, a woman came and did a brief presentation on a study abroad trip to China. The funny thing is, I had just been thinking about all the cool places I could go to study abroad… China wasn’t on the list. But something about the program stood out. I couldn’t pin point exactly what it was until I learned more information about the program. This is when I learned just how rare of an opportunity this was. I had the chance to go to China and experience a brand-new culture and expand my horizons on just how big the world is…

I didn’t know a thing about China except for that I loved the Chinese food in America. I would soon find out it is not at all the same. But before the food difference came an entirely different language in which communication would be extremely difficult and I never knew how intimidating it could be to not know what someone is saying to, or about you. There also came a lot of what if’s… I mean I had never been away from family or friends for more than a week, but this program was going to have me placed in a foreign country for an entire month! The first two weeks I would experience and do hands on activities involving Chinese culture. The last two weeks I would be working with an Environmental Government agency.

Despite my what if’s I knew this opportunity couldn’t be passed up. In preparation for the trip, I got to learn about some of China’s culture and history. This helped give a broader picture of the country I was going to be calling home for the next thirty days.

Upon arrival we flew into Beijing first, we were supposed to fly out to Xi’an next but… We missed that flight. Somehow someway our professor managed to get a last-minute flight arranged for fifteen people. After this minor hiccup we arrived at the hotel where we would set up shop for the first two weeks of the program.

These two weeks were filled with many amazing cultural lessons and history lessons. These lessons showed just how important the culture is to the people of china. In America we learn history but don’t really practice a lot of what our ancestors have. In china they have carried on traditions for years and plan on keeping it that way, which I find amazing. The most amazing part of all of the culture being upheld is that modern technology and business has morphed around the culture. I found this fascinating. Both the culture and opportunity for business was so amazing to see. Everyone helps each other, and the government helps out as well which I found very interesting. All in all, the country of China is so big but has a very small core set of values and has made the country hold on to its history but maintain connection with other countries as well as compete.

China wasn’t on my list of “cool” places to visit because all the other places had cool mountains and bodies of water to take pictures of. Perhaps when thinking about studying abroad I missed that it’s not a vacation it’s a privilege and opportunity. China has by far risen to number one on the list of cool places because of the amazing culture, people, and growth of global presence.

Throughout the second two weeks I Interned at The Ministry of Agriculture. There I learned Chinese and taught colleagues English in the workplace. I also was able to travel around Beijing and explore the history as well eat traditional Chinese meals, in real Chinese family homes. This was what gave me a true picture of China. Sure, all the experiences were amazing, but, the people gave me a closer look at what life is like in China. The people were what made the experiences, they are so welcoming and hospitable.

There were a few points throughout my month in China that I was homesick and didn’t even want to be there anymore. But what kept me going was knowing that the trip was an experience not many can say they did. I also knew that this was the opportunity of a lifetime. Knowing this I was able to keep faith and move forward and really enjoy my time there, as well as, make the most of my time. Traveling in China really opened my eyes and was the most life changing experience I have had and will most likely ever have. 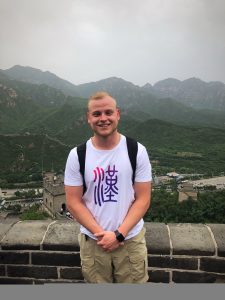