Earlier this summer, I had the opportunity to travel on a faculty led program to study abroad in China. This was an exciting experience for me because this was not only my first study abroad program, but my first time out of the country! 14 students, including myself, traveled alongside Dr. Zhang to Xi’an, where we attended cultural classes at Shaanxi Normal University and visited various historical sites. After 10 days in Xi’an, we traveled to Beijing for four more days before returning the United States. The purpose of this blog is to share some of the most important aspects I experienced over the course of our two weeks in China 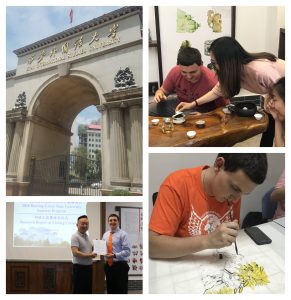 Xi’an. The hotel was conveniently located across the street from a convenience store that offered essentials, snacks, and souvenirs. Just outside of campus, there was a small street with numerous establishments for college students. While most of them were restaurants, there were also shops, bars, a bank, and even a walk-in dentist. We spent a lot of time on this street during our free time.

The Campus itself was absolutely beautiful. Everywhere we looked, there were dozens of trees and flowers that made for a relaxing studying environment. The classes also allowed for a quality learning experience. In our classes, we learned different cultural customs such as tea ceremonies, paper cutting, and 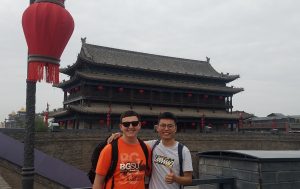 My favorite part of the trip was visiting the Terracotta Warriors, which are life size clay soldiers that were buried in the tomb of emperor Qin Shi Huang just outside of Xi’an. The soldiers were kept secret for hundreds of years, until a local farmer discovered them while digging a well in the 1960s. Since then, thousands of warriors have been unearthed and put on display. I first learned about the warriors through an episode of Scooby Doo I had seen when I was younger. Ever since, I had been anxious to see them in person. I’m so happy that I can now cross it off my bucket list. 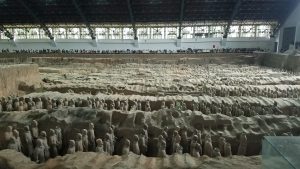 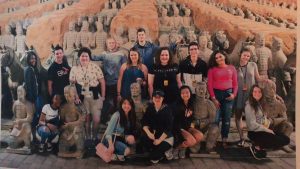 During some of our free time, we visited the Wild Goose Pagoda with one of our language partners, Chen. Our journey to the Pagoda was just as interesting as the structure itself. 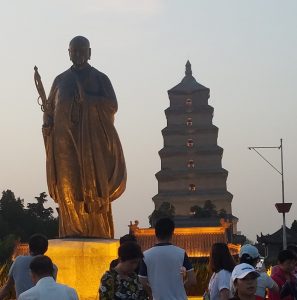 The road leading there was covered in statues, bands, art, and street performers. The Pagoda itself was beautiful at night when lit up. We were not able to go in the Pagoda, but we were able to see the water square behind it. The square is the second largest in the world and could fit nearly five football fields inside. Each night, the square would have a show with multiple fountains and water spouts that correlated with lights and music. I am so glad Chen led us to the Pagoda for the show because we wouldn’t have known about it without him.

The Forbidden City was a beautiful palace designed for the emperor. The emperor was

able to access any point in the city and higher officials were able to access other certain buildings. Normal civilians were not allowed to enter, hence the name “Forbidden City”. There were dozens of court yards and buildings that were elegantly designed. I was mesmerized by the amount of symbolism integrated into each structure. The 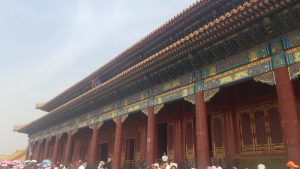 doors were the length of 9 units, which is only used for emperor. The roofs were also painted gold, the color that represents the emperor. I can’t imagine myself living in a place as extravagant as the forbidden city.

The Great Wall of China

The Great Wall was absolutely incredible to see first-hand. I am proud to say I am one of only five out of our group of 15 to make it to the highest point of the wall. According to ancient Chinese philosophy, I am now a “hero” for climbing to the top. The view from the 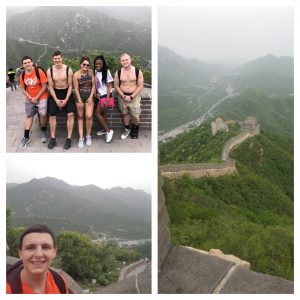 wall was incredible. For miles, we could see nothing except other parts of the wall and tree covered mountains. The view was worth the hundreds of steps we had to climb to get there. We were lucky to visit the wall on the only day the temperature was under 100 degrees out of the entire trip. Interestingly, there is a gift shop located about halfway up the wall to the highest point. This is an incredibly smart business decision, considering how many people stopped for refreshments. I can only imagine how the employees feel, having to hike to work every day. I even struggled to make it that high!

Our last visit before we left for home was the Summer Palace. The palace was another 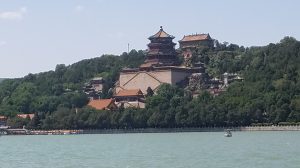 beautiful structure that scaled a mountain. The hike to the top consisted of more stairs that led to yet another incredible view. From the top of the palace, we could see the skyscrapers of Beijing to the left and the beautiful mountains to the right. Right below the palace was a huge man-made lake that had multiple boats traveling through 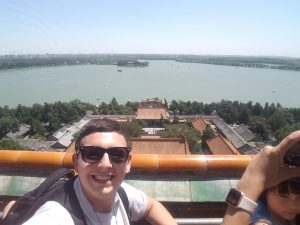 the waters. We were able to board a ferry boat through one of the local agencies and travel to the other side of the lake. The boat itself was designed to look like a dragon and had the same design patterns as the palace itself. It was amazing to see the palace resting on top of the mountain from the lake after having just seen the boats from the top of the palace.

The food in China made for a new experience every day. We primarily ate rice and chicken, but we also constantly tried new things such as fried ice cream, duck sandwiches, baked 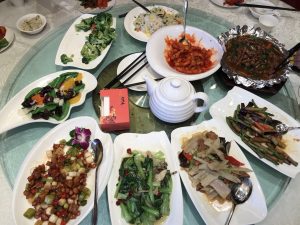 eggplant, and many more Chinese dishes. My personal favorite meal was beef dumplings with a side of soy sauce. In the university cafeteria, we routinely ate chicken fried rice, mainly because we were able to order it without the aid of a language partner. The cafeteria had over 50 booths on two floors for us to experience, but we all fell in love with the chicken fried rice from day one. Along with all the walking and healthy food, I actually lost weight while in China!

I would like to thank you for taking an interest in my travels. My experiences during this 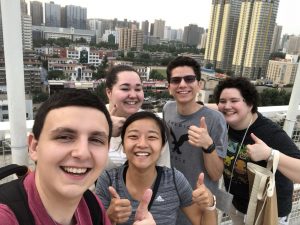 program have truly opened my eyes to the world around me. I noticed so many differences not only in the business styles, but in the life styles as well. Even with our differences in culture, the language partners, other students, and I were able to bond and become close friends, even in such a short time period. We even called our group the “603 gang.” 603 is the bus that we took almost every day because we knew it could take us anywhere in Xi’an for only 1 Yuan. I am so grateful for the friends I made while abroad.

I would like to thank both Shaanxi Normal University and Bowling Green State University for this amazing opportunity. I would also like to thank Dr.Zhang for all of her help during our time in China. She had to endure a lot of stress for us all to share these experiences. Finally, I would like to thank my parents for their continued support in all my endeavors. I would not be at this point in my life without them. I am blessed with the opportunities that came with my time abroad, and I hope to one day travel back to China for more lifelong memories. 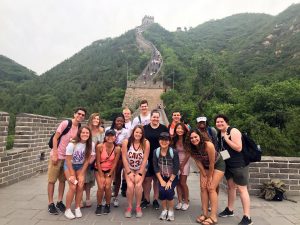