During the summer of 2018 I had an outstanding opportunity to attend a faculty led study abroad program to China. I really love to travel and experience new things, so I thought that this trip would be the perfect match for me. At first I was extremely nervous for this expedition across the world but soon after arriving I knew that I would have an amazing time. In total there were 14 students who attended this trip in addition to the incredible Dr.Zhang. Together we spent 10 days in Xi’an and then 4 more days in Beijing, all from May 21st to June 5th. 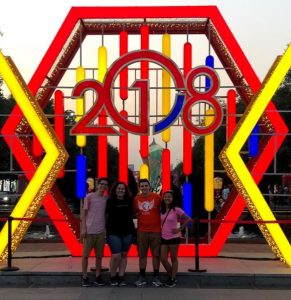 While in Xi’an we attended classes and stayed in a hotel on campus at Shaanxi Normal University. The following people and places are the most memorable parts of my whole experience in China. 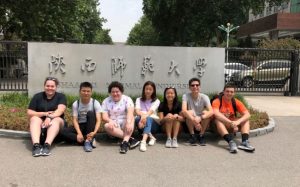 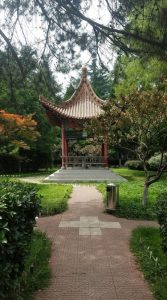 An important part of this trip was being able to attend Shaanxi Normal University. We were able to stay at an on campus hotel, meet students to help us, and take several cultural classes. The campus was very beautiful. Trees and foliage were throughout the entire campus, and surrounded many outdoor seating areas creating a very relaxing environment. Even something as simple as the library was gorgeous looking, with classical looking Chinese architecture with detailed design. The campus as a whole was just so beautiful and peaceful it helped create such an accepting environment. 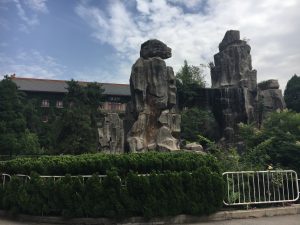 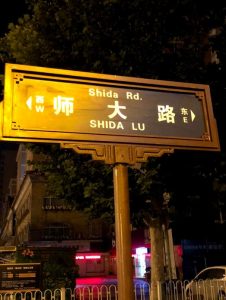 The hotel was just a short walk away from a popular street right off campus known as Shida Lu (Lu means road). On our first day in Xi’an our language partners Chen and Serena took us on a walk down this road and the main road that it was connected to. Shida Lu has many businesses on it, shops range from convenience stores, to restaurants, to even a dentist office. None of the establishments are particularly large, in fact they are all pretty condensed so many can fit all along this road. After visiting here several time we got to try fresh squeezed lemonade, matcha ice cream, and some of the best jiaozi (Chinese dumplings) I have ever had. 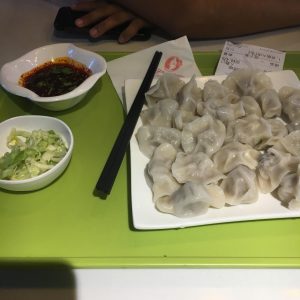 At the college we were also able to take a variety of cultural classes to help us connect with the Chinese culture better. Some of the classes included, traditional painting and paper cutting, calligraphy, the art of the tea ceremony, and my favorite the Chinese language classes. All the classes were very interesting and engaging, and even though we couldn’t understand the professors the language partners did a great job translating for us. 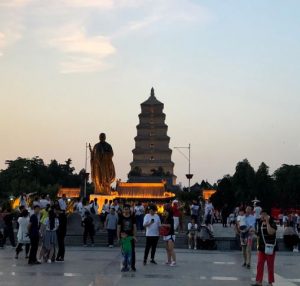 One afternoon during our free time Chen, one of the language partners, took a few of us to go see the Giant Wild Goose Pagoda. It is ancient building and a holy place for Buddhists. It took us a while to walk there from campus but there was a lot to see along the way. We walked down the main road and there were a lot of structures all along the center, some even lit up. In addition to that there were statues, dancers, and live performances every so often. Once we got to the Pagoda we stayed until it was dark enough for us to see the water light show that happens in front of it. 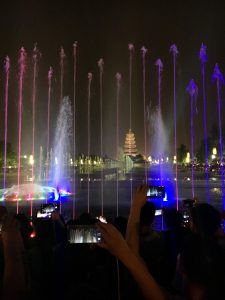 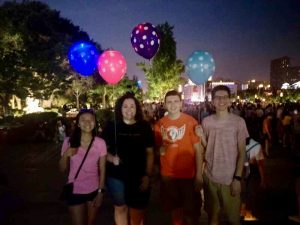 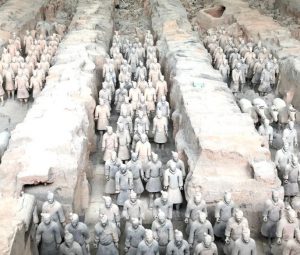 I found the Terracotta Warriors to be a very interesting part of the trip. Before going to China I knew of the Terracotta Warriors but I didn’t know much about why they existed or even how they came to be. Now I know that the terracotta warriors are sculptures of Qin Shi Huang’s army whose main purpose was to protect the emperor in the afterlife. In short it’s a form of funerary art buried with the emperor. I was also very fascinated by the fact that they were only just  discovered in 1974 by a simple farmer trying to dig a well. For some reason I just expected them to have been found longer ago. 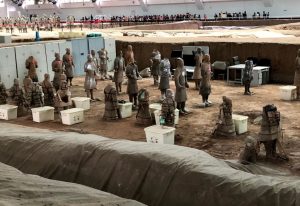 I also found it very interesting that the figures were colored and that many are still buried. This is so that when technology advances they will be able to excavate the warriors and be able to preserve their natural color. Originally, the figures were painted with bright pigments, variously colored pink, red, green, blue, black, brown, white and lilac. I learned much more than I expected at the terracotta warriors exhibit, but it was all thanks to our tour guide Marry who explained it all to us. 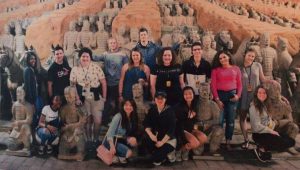 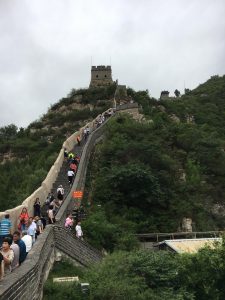 As expected the Great Wall of China was amazing. To be able to climb and witness this wonder of the world was something I never would have expected to be doing in my life. When we got there we climbed up one section of the wall, and contrary to what some may believe the wall is actually broken up into several sections and is actually not fully connected. From the bottom of the wall it didn’t seem like it would be that difficult to climb but just after starting I realized how wrong I was. The stairs were uneven in height and some required to step up pretty high. To get from fortress 7, where we started, to fortress 8 required climbing approximately 400 stairs. Luckily for us we went on a relatively cool day, meaning it was less than the 100 degrees it was for the other days we were in Beijing. All in all I was worth the climb to be able to say that I climbed up the Great Wall of China

There are so many people that I would like to thank for making this the experience of a lifetime. I would like to start by thanking you, the reader, for taking an interesting in my travels and choosing to read all about my two weeks in China. I would also like to thank Shaanxi Normal University and all of its professors who worked with us while we were there, in addition to Bowling Green State University for allowing me to have this incredible opportunity. I will be forever grateful for this outstanding experience. Finally I would like to thank Dr.Zhang for all that she did for us. There were so many of us that it only makes sense that she had to endure so much stress, however she handled it really well in my eyes. She always kept a positive attitude and was super friendly the entire time. She made the whole trip so much better than I ever could have hoped.

Overall this programs has been one of the best things to happen to me. It really opened my eyes to the world around me and allowed me to experience so many new things. Even though there is such a difference in cultures I felt like I really learned to adapt to the differences with the help of everyone around me. I got to meet and become good friends with many people on this trip including students from both Shaanxi Normal University and Bowling Green State University. I truly am grateful for everything I experienced while abroad and who knows maybe one day I will be able to travel back to china again to make even more memories. 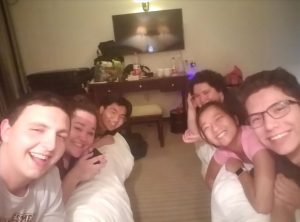