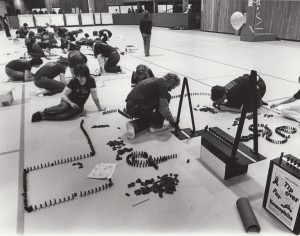 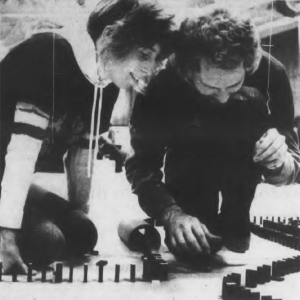 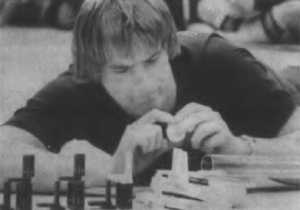 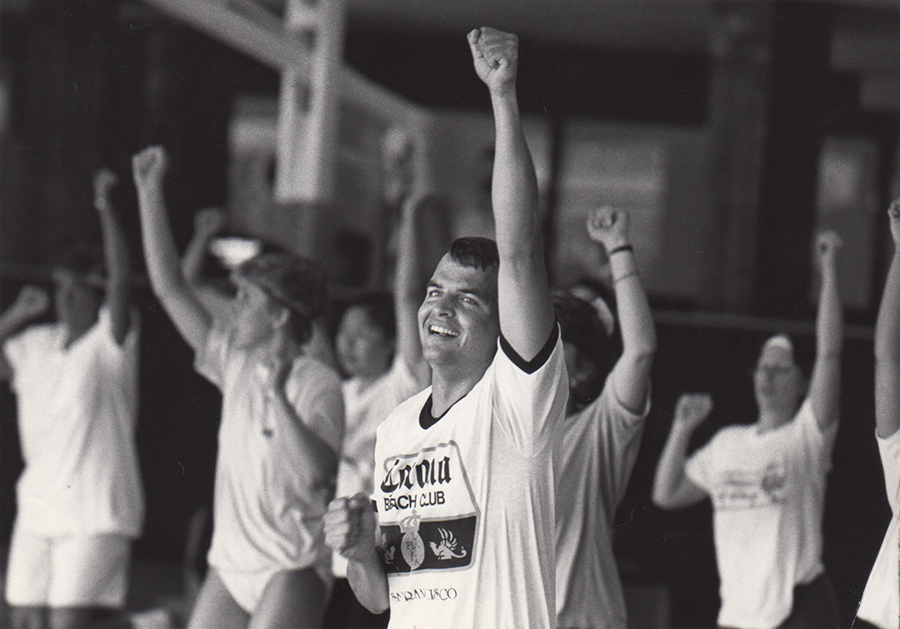 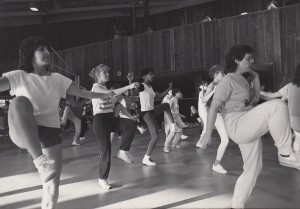 Fit-For-All Aerobics was divided into three levels of difficulty. The green/top level was a 25 minute session called “Go For It,” the yellow/intermediate level was a 15-20 minute session called “Exercise with Caution,” and the red level was an 8-10 minute program for beginners called “Easy Does It.” Rolston explained that the green workout was the most popular, but participants were advised to start at the most comfortable level and work their way up.

To ensure proper placement in one of the three different levels, participants were asked to take a fitness test in the L.I.F.E. Room. However, the testing was not required for program participation. Fitness testing was also available to participants three times throughout the semester to gauge their improvement. The testing included a cardiovascular step test, sit-ups, push-ups, a flexibility test, and a body fat test. 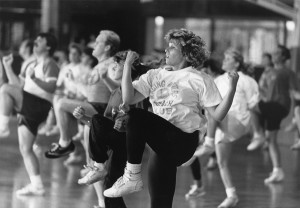 While the majority of participants in aerobics classes were women, Rolston noted that the number of male participants had increased as the weeks progressed. To help men feel more comfortable participating, a Fitness for Men activity was also offered, which focused on calisthenics and activities such as running and basketball.

In order to accommodate the busier schedules of faculty and staff, a noon workout and a 30-Minute Workout were added to the program as well. Rolston commented, “We’re striving to get the faculty and staff into it,” and added that the noon workout is sometimes the only time available for teachers to exercise.

Water Aerobics classes were also held in the Club Pool two days a week and were taught by Rolston. The water aerobics classes followed the same format as regular aerobics, but according to Rolston they did not move as fast and excluded some of the “dancey” movements that were made more difficult in the water.

Dedication ceremonies were held on February 10, 1979 to celebrate the completion of the Student Recreation Center and to name the Samuel M. Cooper Pool.

The day’s events began shortly before noon, when guests first gathered on the balcony to enjoy a consommé appetizer followed by a luncheon in the Club Pool area. At the conclusion of the luncheon, the guests were directed to the activity center on the main level where the Student Recreation Center dedication ceremony was held at 1:30 PM.

Following the ribbon cutting ceremony, guests were directed to the Olympic-sized swimming pool area to take part in a ceremony commemorating the naming of the pool in honor of Dr. Samuel M. Cooper. During his career at BGSU, Dr. Cooper served as chairman of the Health and Physical Education Department and was also the University swim coach.

More than 100 of “Sam’s Swimmers” and divers attended the dedication ceremony, and were identified by orange signs around their necks containing their name, graduation year, and the words “here to dedicate Coach Sam Cooper Pool and real proud of it.” In addition, approximately 10 swimming coaches associated with Dr. Cooper were present.

To begin the ceremony President Moore spoke about the importance of the pool from the standpoint of University administration. Next, Albert Dyckes shared his memories as a former student of Dr. Cooper. Tom Stubbs then spoke as a colleague and fellow swimming coach. Finally, Robert Frary spoke on behalf of the alumni and made a presentation of a facsimile of a plaque with the names of the people who donated to the Sam Cooper Scoreboard.

To conclude the ceremony Mr. Dyckes and Mr. Stubbs presented a plaque to Dr. Cooper, and Dr. Cooper gave a short speech. Known for never being at a loss for words, the planning committee noted in the event schedule that “if he [Dr. Cooper] exceeds that time [5 minutes], he will be pushed into the Pool.”