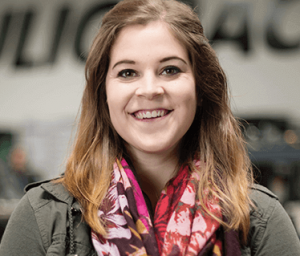 As college students, we all want to someday reach our dream job. Whether it takes a year or 10, and no matter big or small, we can see our dream in sight. 2015 broadcast journalism alumna Katie Wernke is the poster-child for reaching even your wildest of dreams.

Wernke dreamed of one day working for NASCAR. And at 24, she is living her dream, though it turns out to be in public relations and not television.

In January of 2016, she started as a digital marketing manager for ARCA Racing Series, her first post-graduation job, which she said came after a tough six-month search.

“I think once I started working for ARCA and doing a lot of behind-the-scenes type of work I really ended up enjoying that,” Wernke said. “I started doing more with Photoshop and working with the different drivers throughout the series and I sort of fell into that role really well and realized that TV wasn’t what I really wanted to do.”

Staying in the public relations field, Wernke became PR director at Cunningham Motorsports in 2017 then moved to Kaulig Racing in November that same year.

At  Kaulig Racing, one of the teams in the NASCAR Xfinity Series,  Wernke is the communications and digital content specialist.

“I handle all of our driver’s day-to-day and at-track scheduling and appearances as well as team videos, graphics and social media,” she said. “It’s really a great job and a great fit for me because  I’ve been able to unleash a design potential I never even knew I had until working in racing.”

Although Wernke was able to reach her dream career so quickly, she did face a few challenges along the way.

“Like every job, you have to climb your way up the ladder and starting off in an entirely different racing series was a challenge in itself,” Wernke said.

Wernke’s time at BGSU help set her up for success.

A transfer student from the University of Cincinnati, Wernke participated in BG News and Kappa Delta Sorority at BGSU.

She was the sports director for BG24, the student run television station, her senior year. During that time, she oversaw the sports department, which included planning weekly content and reviewing final stories before air time.

Ken Garland, faculty adviser for BG24, remembers Wernke as someone who moved the sports coverage forward.

“Katie had a great work ethic,” Garland said.  “She went above just game footage and went the extra mile.”

Wernke said being independent in the classroom and going out to find stories were a big plus for her work.

“With my job, teamwork is vital, but there is also a sense of independence,” Wernke said. A lot of graphics and video ideas I need to come up with and execute on my own.”

Coming out of high school, Wernke said working in sports was always her dream, even though she thought it was far-off. She credits Garland for showing  her the potential she had in journalism.

“Ken helped me see that if I wanted it, there was without a doubt I could make it,” Wernke said. “I think my experience at BG wouldn’t have been anywhere close to what it was without Ken.”

“College is great for finding what you want to do,” Garland said.  “It is important to try to get a position early because it may not be what you think.”

Wernke recommends that students takes risks and jump right into the action, even if that means accepting some losses.

“At some point you’re going to come to a fork in the road and you can either take a chance or stay safe,” Wernke said. “As terrifying as it may be, if you really want to be happy and achieve your dreams, you have to take that chance.”

This entry was posted in Alumni, Alumni Achievements and tagged Katie Wernke, Ken Garland. Bookmark the permalink.
Skip to toolbar