After two years on the West Coast, 2010 graduate finding career success back in the Midwest 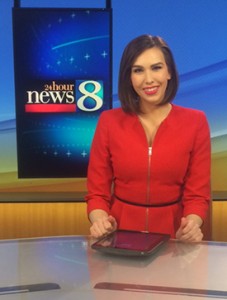 After discovering her passion for journalism, Toledo, Ohio, native and 2010 alumna Heather Walker ditched her dream of becoming a Broadway star and headed for the news station.

Currently a reporter at WOOD-TV8 in Grand Rapids, Michigan, Walker discovered her passion for television news by volunteering with BG24 News during her time at BGSU.

“I was not that little girl who watched the news and said, ‘Oh I want to be like that woman I’m watching,’” she said.

It was Walker’s father who signed her up to work at the organization thinking it was something she would enjoy.

Out of high school Walker wanted to pursue a Broadway career in New York, but it was her parents who helped her decide to attend a year at BGSU, their alma mater.

As she thought back to her first year of college, she said it was a decision she is now very glad she made.

She started editing with BG 24 News then reporting, falling in love with the news from then on.

Walker said she has great memories from her experience at the BG24 News. “BG24 News taught me the ABC’s of news,” she said. “It laid a good foundation and I was able to grow from there.”

Katherine Bradshaw, associate professor and chair of the Department of Journalism and Public Relations, acted as a mentor and helped guide Walker through her college career.

Looking back, Bradshaw remembered how incredibly helpful Walker was to BG24 News.

“The entire organization benefitted from her being there in terms of her kindness and helping other people,” Bradshaw said.

Bradshaw said that Walker had an amazing confidence in herself and her own abilities.

“Heather Walker could decide to do something and could do anything she decided to do,” Bradshaw said.

After graduating Walker sent her tapes all around the United States, receiving a number of offers from different stations.

“I didn’t really care where I was. I just wanted to be at a great station to start my career,” she said.

Walker accepted an offer in Yakima, Washington, where she spent two years as a multimedia journalist at KIMA-TV and radio station KDBL.

One story she worked on in particular earned her a Society of Professional Journalists award. Her investigative piece included evidence of a Yakima Gang Sergeant behaving inappropriately while on the job.

Sarah Navoy, who worked with Walker for two years in Yakima, said: “Heather is a strong person in and out of the newsroom. She handles herself with confidence. Just by being who she is, Heather silently encourages those around her to step up their game.”

After two years in Washington, Walker decided to take her talents to a station closer to her hometown. Walker said she decided to move for the sake of her mother, who was not happy with her living across the country, and because WOOD-TV 8 is an amazing station.

In December 2012 Walker accepted the position in Grand Rapids. Her voice lit up as she cheerfully described her position at the station. She said her job now is similar to the position in Yakima, except now she has a photographer and an assignment desk. She no longer has to generate her own stories.

Walker said her favorite aspect of her job is her ability to help people.

“Television is very powerful and you can use that for good, and when you do it’s a great feeling,” she said.

Walker said she feels her best when she is able to make a difference in peoples’ lives.

This entry was posted in Alumni and tagged Heather Walker, Kathy Bradshaw. Bookmark the permalink.
Skip to toolbar