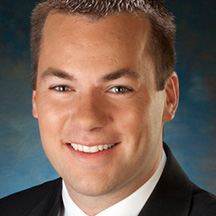 Joe Stoll, a 2005 broadcast journalism graduate from Bowling Green State University (BGSU), took his skills as a news anchor and transferred them into owning his own business.

Situated in his office, complete with lime green walls, Stoll seemed quite comfortable in his role as president and CEO of locally-owned and operated Toledo Flags.

Young, energetic and never without a smile, Stoll openly discussed his career as an assignment editor, news anchor and, finally, business owner within the past 10 years.

Stoll was first introduced to broadcast journalism at WTVG-13 ABC, a local news station in Toledo, Ohio, where he worked during his first years at Owens Community College.

“One of my coworkers there [at WTVG-13 ABC] was a BG alum and she took me there, showed me everything they had to offer and I just loved it,” said Stoll.

Stoll said he felt at home at BGSU and once he found his niche, realized broadcast was the perfect field for him.

“I was always glued to the TV news growing up,” he said. “If a TV newsperson was in the Point Place area, I would get on my bike and go hunt them down just so I could see them do their thing.”

At BG, Stoll was known for his charisma and affinity for broadcast.

“Joe Stoll still stands out as one of the students who are dedicated to broadcast,” said Kathy Bradshaw, chair of the Journalism and Public Relations Department. Bradshaw joked that she wished, “every classroom was three-fourths full of Joe.”

From there, he was offered a job as an assignment editor and broadcast technician at WTVG-13 ABC, a station owned by The Walt Disney Company.

After working for five years at WTVG-13 ABC, Stoll held positions at LIN Media as an anchor, Raycom Media as a reporter and Sinclair Broadcast Group as an assignment editor.

Throughout the past 10 years, all of Stoll’s career transitions were by choice, but toward the end of his broadcast career, he realized he did not want to be in broadcast anymore.

Traveling for the job was a pro and a con for Stoll and he explained that being away from family and friends and missing out on important events was a contributing factor to his decision to leave broadcast.

Stoll and his then fiancée were in Columbus, Ohio, when he heard that Toledo Flags was in trouble.

“It just so happened that this store was in jeopardy of closing and I had worked here when I first started college … and so I talked to [my wife] about it and said would this be something you’re willing to do?” Stoll said.

In January 2014 Stoll became the owner and CEO of Toledo Flags, a business located in Point Place in Toledo, Ohio, and Stoll’s childhood home.

Toledo Flags specializes in custom flag production and not only supplies flags and designs, but flag poles and installation.

Stoll explained that while he’s had to learn new things like bookkeeping, he’s used many of the techniques and practices he acquired while working in broadcast.

“Being in news taught me how to be neutral, how to stay on neutral ground, so I think I have a good basis on that,” Stoll said.

Wendy Beallas is the daughter of the former owner of Toledo Flags, Howard Pinkley, and she felt that Stoll fell easily into rhythm of the business.

“He knows how to speak to people … and from his experiences when he was here before, that was helpful,” she said. “Because he kind of understood how the business ran.”

While not much of the business has changed since Stoll took over, he stated he has worked on regrouping and reorganizing this past year.

He has worked on every aspect of the business from taking inventory to installing flagpoles and pouring concrete.

However, Stoll said he still hasn’t learned how to sew and doesn’t plan on it anytime soon.

The best part about owning your own business? Being in charge of yourself, quipped Stoll.

“Owning your own business, you get to watch your ideas either flourish or fall to the wayside,” Stoll said. “You know not to do it again or make some changes to it.”

Throughout his time as CEO of Toledo Flags, Stoll has maintained his signature enthusiasm. When he spoke of his work, past or present, he showed a great sense of pride in the actions he took to achieve his goals.

Beallas, like Bradshaw, noticed Stoll’s enthusiasm from the first time she met him and said he has maintained that eagerness to work.

“My father was the same way … he was always out there, couldn’t wait to go to a meeting,” Beallas said. “Those were important qualities … I see the same things in Joe, which is very good.”

Journalism was a large part of Stoll’s life for the past ten years and though he is no longer working in that field, it still plays a very large role in his current lifestyle.

Even though not every aspect of being a business owner is easy, rising costs of goods and transportation for example, Stoll remains optimistic about the future of his company.

“Don’t be afraid to do what you want to do. There’s ups and downs in everything that we do, but if you just follow your inner self, it’s going to guide you to happiness,” Stoll said.

This entry was posted in Alumni and tagged Joe Stoll. Bookmark the permalink.
Skip to toolbar