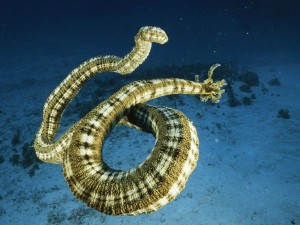 Each creature on earth has some kind of distinguishing feature that the brain clings onto in order to be able to recognize that organism at a later date. It is no different when trying to figure out the unknown organism each week, I tend to use previously stored knowledge to help when figuring out the organism. Focusing on the physical traits that can be seen for each creature tends to be the way that I figure out what the organism is. This week our unknown organism was the species Holothuroidea, more commonly known as the sea cucumber. I almost instantly knew that the unknown organism was a sea cucumber due to a few distinguishing features: First the long tube like body with one opening, a mouth and an anus in the same place, secondly the image we used in class showed the mouth parts out feeding. From those distinguishing features I recognised the sea cucumber relatively quickly. Then by cross referencing the characteristics with a taxonomy chart I was able to confirm that the organism we were focusing on this week was the sea cucumber. When talking about the physiology of an organism it would help to first look at the definition. Webster defines physiology as, “ The branch of biology that deals with the normal functions of living organisms and their parts. The way in which a living organism or bodily part functions.”(https://www.merriam-webster.com/dictionary/phylogeny) That means that in this article we will be looking specifically at the parts of the sea cucumber that are important for living functions. The important body parts in a sea cucumber can be broken down into 6 categories. 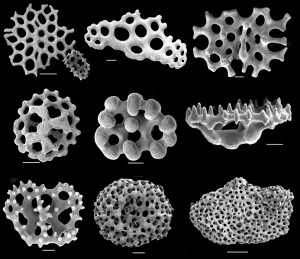 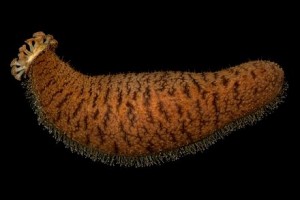 sea cucumber with tube feet at the bottom as well as tube feet for feeding.
https://en.wikipedia.org/wiki/Sea_cucumber

The water vascular system is a unique feature used by the echinoderms, it might also be one of their most important features. The WVS is a hydraulic system that is used for locomotion, capturing food, waste transportation, and respiration. The way the system works according to Wikipedia is a system of canals that are connected to tube feet. They move the tube feet by contracting muscles and forcing the water into the tube feet to extend them. They retract the tube feet by relaxing the muscles and allowing the water to flow back into the body cavity. Tube feet are tiny tubes that are sticky and used for walking as well as capturing prey. In many echinoderms they have the primary purpose of movement and are only located on the underside of the organism. In Sea cucumbers the tube feet are used for movement on the underside but they are also used as arms to pull sediment into the mouth hole. This form of feeding is unique to the sea cucumber so if you see an organism with tube feet mouth parts then it is probably a sea cucumber. 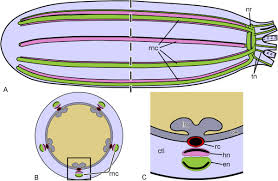 Sea cucumbers do not have a complete nervous system and posses no brain. Sea cucumber with radial nerves and ring nerve

It might not come as a surprise that echinoderms do not have a brain in the definition we think. They have a decentralized nervous system meaning they have no singular brain. Instead most echinoderms are made up of a nerve ring and radial nerves that run down the body and into the arms. They also have a net of nerves that is located just under the skin. This nerve net is used to detect touch and chemical cues in the water and is how many echinoderms find their food and know when to defend against predators. Sea cucumbers are relatively similar to the rest of their phylum when it comes to the nervous system. The primary difference is that they have no external arms or branches so the radial nerves run along the body from mouth to anus. 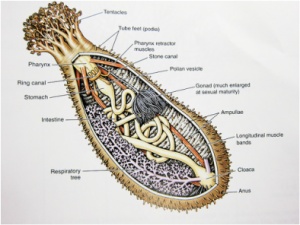 Cross section of a sea cucumber showing its different organs. Take note of all the fluffy breathing trees.
http://btmgcardio.weebly.com/sea-cucumber.html

Echinoderms do not have a complete circulatory system. A Circulatory system is a system that circulates blood and lymph through the body, consisting of the heart, blood vessels, blood, lymph, and the lymphatic vessels and glands. They are a phylum that lacks a heart and blood vessels. Blood is mostly held in spaces between the body wall and the coelom. They can move the blood around by contacting the muscles in the body to push the blood like fluid back and forth. The blood is also not the same as we think the definition of blood is. Echinoderms have a fluid that contains blood cells that works as their circulatory fluid. In the context of sea cucumbers they have the same kind of circulatory system as many of the other species in phylum echinoderm. They wiggle their bodies back and forth while walking on their tube feed in order to move their blood around their bodies.

Sea cucumbers are unique and in my opinion adorable creatures. They seem like the black sheep of the echinoderm phylum due to all their differences from their relatives like the starfish. However if you take a look inside both the creatures and break down their bodies into parts you can see that they aren’t all that different.

This entry was posted in echinoderm. Bookmark the permalink.