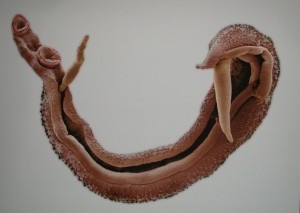 Image from class that I found when trying to figure out the unknown organism. Link

Flat worms are by far some of the most interesting and down right disgusting creatures that exist in our world today. They are creepy little creatures that tend to be parasitic to a variety of different hosts. I figured out that we were talking about Schistosoma aka blood flukes this week by first doing a simple google search for obvious physiological cues. I typed in invertebrate worm with mouth parts and it happened to link me to a image that looked like the one we had as an example in class. So obviously after looking into the image I found a name and phylum to go with the unknown organism. I found out it was a Schistosoma in the phylum Platyhelminthes. From there I knew that talking about ecology would be really interesting due to their parasitic nature. 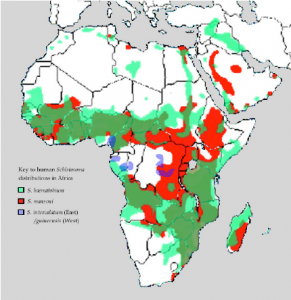 To even begin discussing their ecological impact first we must look at the definition of ecology. According to dictionary.com ecology is defined as, “The branch of ecology dealing with the relations and interactions between organisms and their environment, including other organisms.” It is clear that when talking about the interactions between our organism of choice this week, Schistosoma, there will be allot of emphasis put on their effects of hosts. Their are four separate classes that are in phylum Platyhelminthes: Trematoda, Turbellaria, Monogenea, and Cestoda, and it is a good idea to look at and compare the hosts that all the classes have. 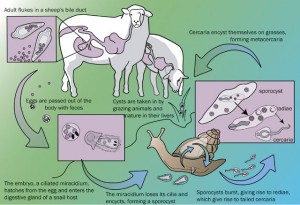 Trematoda are unique for their mouth parts which look like suckers that anchor them to their hosts, This is the class that includes our organism Schistosoma. Their life cycles include two separate host bodies. Their first host is referred to as an intermediate host. Schistosoma are divided into four groups: 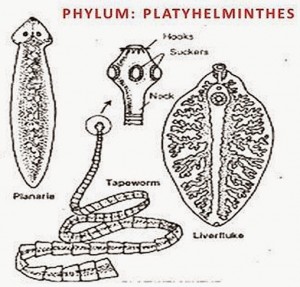 Different examples of species that are included in the phylum platyhelminthes. Link

The other classes that are included in phylum Platyhelminthes are Turbellaria, Monogenea, and Cestoda. Turbellaria are mostly free living predators, some are parasitic and attach themselves to fish and other aquatic invertebrates. Monogenea are external parasites that attach to fish, amphibians, and other aquatic reptiles. Finally there is the class Cestoda who attach themselves to a variety of hosts. If the Cestoda is an aquatic species then they use crustaceans as intermediate hosts, and use fish as final hosts. If the Cestoda is on land then they use herbivores like cattle as intermediate hosts, and dogs, cats, and humans as final hosts.

There are many side effects that come from being infected with blood flukes. Some effects include:

This entry was posted in Platyhelminthes. Bookmark the permalink.