by Anne Mier, BGSU History major. This is one in a series of posts written by students in HIST 4800 in Spring, 2020, putting our world into historical context for the public.

COVID-19 has been a stressful and scary time for a lot of people because their entire lives have been practically taken away from them. This virus is different from others because it can infect anyone, so there is no avoiding it.  In a time like this, it can be easy to put the blame on someone or a particular group. Especially when the first cases were being diagnosed and there wasn’t a lot of information, it was easy to jump to conclusions. Rather than blaming those who aren’t following the rules of social distancing, a lot of people have been blaming Chinese people or anyone that is perceived to be Asian for being the source of the virus.

END_OF_DOCUMENT_TOKEN_TO_BE_REPLACED

by Victoria Masson, BGSU History major. This is one in a series of posts written by students in HIST 4800 in Spring, 2020, putting our world into historical context for the public.

In 1918, the world was fighting the “Spanish flu” which came from birds. It was thought to have come from Spain, but researchers showed that it came from New York. More than 50 million people have died from this according to the article “1918 Spanish Influenza Pandemic Versus COVID- 19″. (.https://www.biospace.com/article/compare-1918-spanish-influenza-pandemic-versus-covid-19/).  At that time there were no vaccines for it and currently no vaccines for COVID-19. The current pandemic helps us understand the past because it affected people all over the world.

END_OF_DOCUMENT_TOKEN_TO_BE_REPLACED

by Brendan Battle, BGSU History major. This is one in a series of posts written by students in HIST 4800 in Spring, 2020, putting our world into historical context for the public.

The United States and the world are in the midst of the worst international pandemic in generations, the COVID-19 novel coronavirus. The virus has claimed tens of thousands of lives and transformed everyday life as people, governments, and businesses struggle to respond to the highly virulent and deadly disease. However, this is not the first time the nation has been locked down by disease, with similar events occurring due to the 1918 influenza pandemic, popularly known as the “Spanish Flu.” The virus is estimated to have infected roughly five hundred million people, nearly a third of the world’s population at the time and claimed the lives of more than fifty million people, with over 500,000 of those deaths occurring in the United States.[1] Responses to both pandemics show weaknesses in our social systems and a conflict between interests of public safety and economic and political goals. The measures taken by our national, state, and city governments in response to our current pandemic show close similarities in both the successes and failures over one hundred years apart.

END_OF_DOCUMENT_TOKEN_TO_BE_REPLACED

The History Department is unveiling a new curriculum in Fall 2020. We have compiled a brief FAQ of questions students have raised regarding how they will be affected by the curriculum change.

END_OF_DOCUMENT_TOKEN_TO_BE_REPLACED 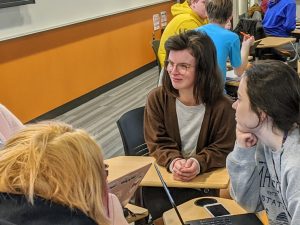 Kinsey Schreiber in action in the classroom

I loved being an Undergraduate Teaching Assistant for the BGSU History Department. It was one of the best experiences I had at Bowling Green State University. It taught me to be adaptable and more open to listening to others rather than focusing on what I believe is best. The class I UTA’d for was Dr. Schocket’s History 2050: Early America, 1492-1877. Along with Dr. Schocket, I was lucky enough to work with an amazing Graduate Student, Brittany Von Kamp, who worked at the Graduate Teaching Assistant for the class. Working with both Dr. Schocket and Brittany was incredible. I enjoyed spending time with them both inside and outside of the classroom. END_OF_DOCUMENT_TOKEN_TO_BE_REPLACED 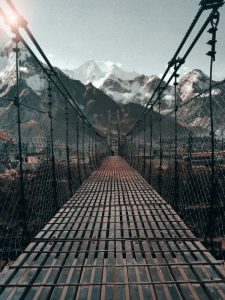 When I replied “No” to Kinzey’s question, and to Colin’s follow-up, I was pretty sure of my answer.
I was wrong. The resulting historical adventure began with a lively class discussion, continued through an independent study, and eventually resulted in an article that undergraduates Kinzey McLaren-Czerr, Colin Spicer and I wrote together. END_OF_DOCUMENT_TOKEN_TO_BE_REPLACED

Students Kinzey M. McLaren-Czerr and Colin J. Spicer, along with Professor Andrew M. Schocket, are published in the Journal of the American Revolution. Titled “The Constitution Counted Free Women and Children – And it Mattered,” the article tackles the importance of counting women and children in the population count of a state.

To check out the article, click here or the link below.

The Constitution Counted Free Women and Children—And It Mattered