The BGSU Department of History and the BGSU Chapter of Phi Alpha Theta will host the “Excellence in History” event Friday, April 24 at 1 pm in Bowen-Thompson Student Union Room 207. Among the events featured are the presentation of awards and scholarships for undergraduate and graduate students, initiation and recognition for Phi Alpha Theta, and the presentation of Research Posters. All are invited to attend; there will be a light luncheon afterwards in the History Department Conference Room, Williams 141. If interested in attending, please RSVP to Tina Thomas at tamos@bgsu.edu by Monday, April 20. 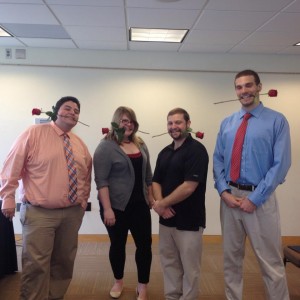 Dr. Hahn’s lecture was titled “Mission Accomplished or Mission Failure? The United States and Iraq since 1990,” presenting the history of our relations with Iraq from the invasion of Kuwait to the present-day tensions with ISIL. 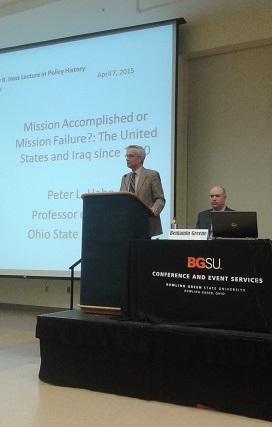 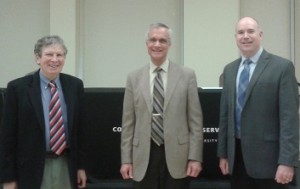 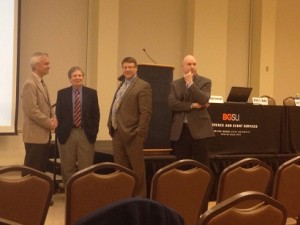 Liz Adamo, Alex Sycher, and Joe Faykosh presented a panel at the Ohio Academy of History Annual Meeting at Ohio Northern University on Friday, March 27th. One of the few graduate panels accepted, they titled their panel “The Power (and Art) of Persuasion in the Early Twentieth Century,” and focused on personal motivations behind public pronouncements.

Liz Adamo presented “Complicity and Resistance in French Women’s Colonial Nonfiction.” Alex Sycher presented “War as Cinema: The German Soldier in Nazi-Era Film.” Joe Faykosh presented “The Turning Point: The Democratic Party and FDR’s Circular Letter of 1924.” Adamo and Sycher are both completing their Masters degrees, while Faykosh is writing his doctoral dissertation. The panel was chaired by Dr. Beth Griech-Polelle. 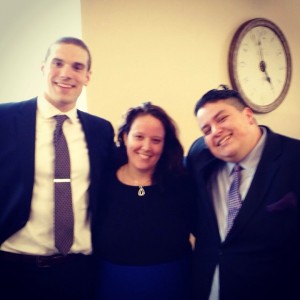 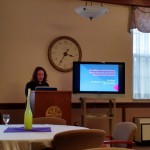 Liz Adamo presenting at the Ohio Academy of History 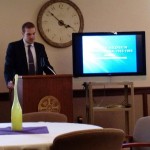 Alex Sycher presenting at the Ohio Academy of History 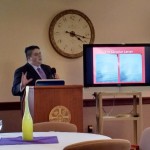 Joe Faykosh presenting at the Ohio Academy of History

The faculty in the History Department at Bowling Green State University were well represented at the Ohio Academy of History’s Annual Meeting, representing the top scholars from around the state. This year’s meeting was held at Ohio Northern University in Ada, on March 27-28th.

Dr. Larry Nelson presented “Green Clay’s Reinforcement at Fort Meigs, May 5th, 1813” on the panel “Fort Meigs and the War of 1812,” and Dr. Donald Eberle presented “‘Lift the Floodgates and Unloosen the Civic Spirit’: Public Health in Ohio During World War I” on a panel titled “Historical Perspectives on Health Care.”

Dr. Andrew Schocket served as commentator for a panel titled “Constructing Digital Humanities: (Mis)Representations of the Past in Video Games.” Dr. Beth Griech-Polelle served as chair of a panel titled “The Art and Power of Persuasion in Early Twentieth Century.” Dr. Benjamin Greene served as moderator for the Book Prize Roundtable on Daniel Rivers’ Radical Relations: Lesbian Mothers, Gay Fathers, and Their Children Since World War II. Dr. Walt Grunden served as moderator for the session on “Teaching World History.”

For more on our faculty, their teaching, and their research interests, please peruse the faculty page! 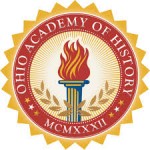 Six Masters students from the Graduate Program in Policy History at BGSU presented at the University of North Carolina-Charlotte’s Graduate History Forum on March 28. Travis Snyder presented his paper, “Psychological Toll (Coping with PTSD after the Civil War),” on a panel titled “Physical and Psychological Scars of War.” Aaron Lewis presented his paper, “Boston Red Sox Championship Representation in the Media,” and Lanna Demers presented “Published Public Opinion and the London Work Horse (Changes in the Victorian Era),” on a panel titled “Media and Culture.” Victoria Harwood presented “The Puritan’s Problem: Genocidal Tactics in King Philip’s War” and Ashley Stevens presented “Political Genocide and North Korea’s Gulags” on a panel titled “Genocide and Politics.” Joe Lueck presented “‘Paying the Penalty for Lawlessness’: Major Stephen Cabot’s Account of the Boston Draft Riot” on a panel titled “Politicizing of Materials and Bias in Historiography.”

All six students are first-year Masters students in the History program. 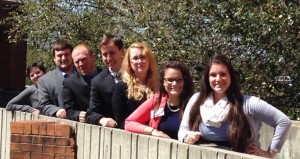 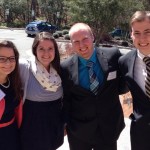 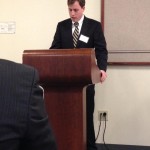 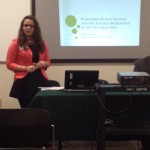 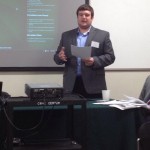 Joe Faykosh, current Doctoral candidate in the Graduate Program in Policy History at BGSU, led a Phi Alpha Theta Professionalism/Teaching Forum titled “So, You’re Teaching for the First Time?” He discussed strategies for creating a class syllabus, course content, evaluations, and other tips he’s learned from his first time teaching history at BGSU to the present. The session was aimed at graduate students, whether interested in moving on to other doctoral programs or entering the teaching field with a Masters. History faculty Dr. Scott Martin, Dr. Walt Grunden, and Dr. Michael Brooks also shared some of their advice from their first forays into teaching.

“So, You’re Teaching for the First Time?” was part of the ongoing Phi Alpha Theta Professionalism Series “So, You Want to be a Historian?” with other sessions on presenting at conferences and applying for doctoral programs. 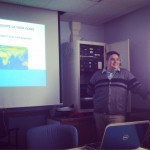 The Gary R. Hess Lecture in Policy History will be held Tuesday, April 7 at 4 pm in Room 228 of the Bowen Thompson Student Union as the Department of History welcomes Dr. Peter Hahn, Professor and Chair at The Ohio State University. Dr. Hahn will lecture on “Mission Accomplished or Mission Failure? The United States and Iraq since 1990.”

The Hess Lecture was created at the initiative of Professor Hess’s former students. This annual lectureship is held to recognize his contributions to the profession and university during his forty-five years of service to BGSU from 1964 to 2009. This year, additional funding to support this lecture has been provided by BGSU’s College of Arts and Sciences. The coordinator for this year’s lecture is Dr. Benjamin Greene.

To facilitate planning, please email history@bgsu.edu by April 1, 2015 to let us know whether you plan to attend. 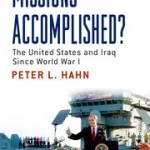 Phi Alpha Theta will continue its series “So, You Want to Be a Historian?” with its next forum: “So, You Want to Teach History?” on Wednesday, March 25 at 1 pm in the History Conference Room. Joe Faykosh, current Ph.D. student, will lead a discussion on identifying texts, developing syllabi, creating assessments, and the other fun/scary aspects of teaching on your own for the first time.

All are welcome to attend; food and drink will be provided!

Phi Alpha Theta’s Professionalism Forum “So, You Want to Be a Historian?” previously covered presenting at conferences and applying for doctoral programs, with future sessions planned for preparing for the job market, and public history opportunities. 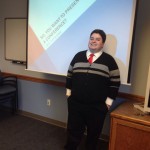 Several members of Phi Alpha Theta judged the entrants of local students in the Northwest Ohio District History Day, held at the Bowen-Thompson Student Union on BGSU’s campus on Saturday, March 14. Students could enter junior or senior level projects around the theme “Leadership and Legacy,” sponsored by the Ohio History Connection. Projects ranged from papers, performances, exhibits, websites, and documentaries.

Representing Phi Alpha Theta and the Graduate Program in Policy History at BGSU were students Joe Faykosh, Alex Sycher, Rachel Pawlowicz, Michael Ginnetti, and Alexandra Kuznicki. Judges interviewed students about the projects and assessed the entries for further competition at the state level in Columbus. The judges had a great time and were excited to share a love of history with the next generation of scholars! 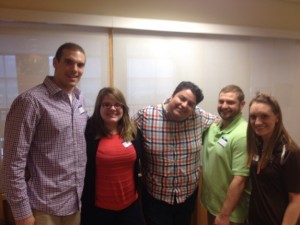 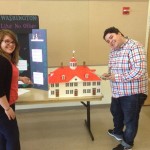 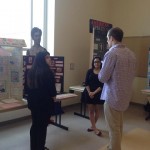 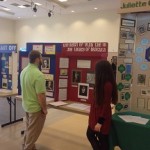 Joe Faykosh, Ph.D. candidate in the Graduate Program in Policy History at BGSU, presented at the Southern American Studies Conference, titled “Reconstruction: 2015-1965-1865,” held from February 19-21 in Atlanta, Georgia. Faykosh presented his paper, titled “A Party Fractured: Franklin Roosevelt and the Democratic Solid South of the 1920s” in a panel titled “The Longue Durée of White Supremacy.” Faykosh studies 20th century political history and is writing his dissertation on the FDR Circular Letter of 1924. 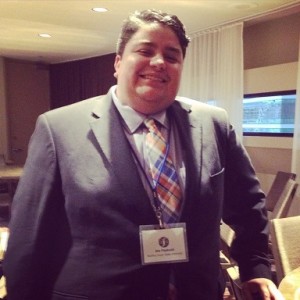 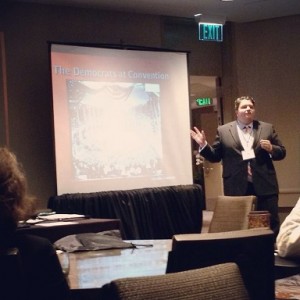