As we all ready to celebrate this time of giving and thanks, appropriately named Thanksgiving, it is important to remember the holiday’s origins- which is significantly different than many believe. 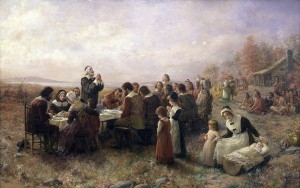 Thanksgiving has evolved significantly since the Puritans landed in modern eastern United States and shared their infamous feast with the Natives. While many of us think of Thanksgiving as originating from the Puritans, that is only partially correct. While the Puritans did “days of Thanksgiving,” they were called infrequently by colony councils and governors during time of war. During times of success, the Puritans would pray to God and feast, as illustrated by this quote from a Council at Large meeting at Charlestown, Massachusetts, “The holy God having by a long and Continued Series of his Afflictive dispensations in & by the present Warr with the Heathen Natives of this Land…. The COUNCIL have thought meet to appoint and set apart the 29th day of this Instant June, as a day of Solemn Thanksgiving and praise to God for such his goodness and Favour.” During times of failure and losing battles, they believed they were being punished by God and therefore famine.

These “days of Thanksgiving” were, despite popular belief, irregular and exclusive to the New England Puritans. It was not until Abraham Lincoln, in an attempt to bring unity to the United States during the Civil War, did Thanksgiving, as is known today, become a national holiday. On October 3, 1963, Abraham Lincoln would proclaim in a proclamation that “I do therefore invite my fellow citizens in every part of the United States, and also those who are at sea and those who are sojourning in foreign lands, to set apart and observe the last Thursday of November next, as a day of Thanksgiving and Praise to our beneficent Father who dwelleth in the Heaven.” Ever since, Thanksgiving has been treated as a day of feasts (including the infamous turkey, sweet potato, stuffing and cranberry sauce platter!) and special thanks, religion and otherwise, in the United States.

From us to you, have a happy Thanksgiving! Stay safe, eat well and remember everything you have to be thankful for.