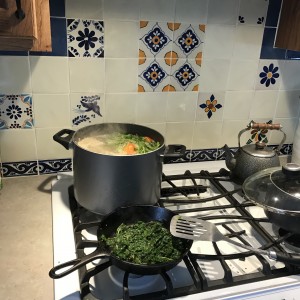 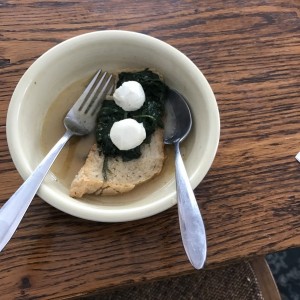 Last Sunday it was cold and snowing in Bowling Green. The weather invited to stay inside, savor a cup of hot cocoa and fill the house with the smells of a stew or a soup. I’d been thinking a lot about soup in the last couple of months. A student in the History-Spanish dual MA, Nanosh Lucas, is writing a thesis on food culture and social distinctions in 19th-century Mexico under my supervision. As he started his research on cookbooks, one family of recipes stood out: the sopa de pan or bread soup. There were many variations; in some early cookbooks virtually all soup included bread—often old bread. In its most common form, sopa de pan was one slice of bread covered with vegetables (probably boiled), and covered with a cup of hot broth. The word soup, in fact, originally meant bread dipped in broth. A mix of expensive spices and toppings, or just fresh bread, made this an appetizer on the table of the wealthy; but newspaper articles often described it as a poor family’s everyday meal.

The sopa de pan doesn’t sound very enticing for our present-day taste, but Nanosh and I have joked for a while about trying out the sopa de pan. And last Sunday it was the perfect storm: I had plenty of vegetables and chicken leftovers to make a broth from scratch, a day-old loaf of bread, a bag of spinach that was screaming to be cooked right away, and a couple of mozzarella balls that I bought impulsively from the supermarket’s new “olive bar.” Add to the mix the actual snow storm outside.

Some hesitation ensued. I can do my own variant of sopa de pan, but is it going to be authentic? I had some ingredients that often pop up in the sources I consulted in my research on food supply: carrots, onions, parsley, tomatoes. My bread was day-old, whole-wheat and homemade. Not your typical Mexico City bread, which was bought in bakeries. (The added tablespoon of chia seeds in the dough do not make up for its lack of Mexican authenticity.) Ovens were a luxury, and there were no communal bread ovens as in the Middle East. And finally, spinach and cheese. I have not found any mentions of spinach in the sources I’ve worked with. In the wonderful online collection of 19th-century newspapers run by Mexico’s National Library, the term spinach (“espinaca”) appears only very late in the century, and I suspect it wasn’t a popular fixture in produce markets. Cheese was more frequent, although I suspect only a few consumed it regularly. Mexico City residents bought a quantity equivalent to an ounce (the weight of my mozzarella ball) every five days, according to trade statistics of the eighteenth century. Sopa de pan was defined not by the ingredients, but by its simplicity and flexibility. To me it was a sort of edible compost of leftovers. What is more historically authentic than the constant adaptation of the old to new circumstances?

As I put the pot to boil and then simmer for a couple of hours, I couldn’t help thinking of that other element of modernity in this sopa de pan: the gas burner. In these two hours at low heat I burned close to 15,000 BTUs (British Thermal Units). And I did not care. Gas is an abundant and relatively inexpensive fuel today. But in the nineteenth century, this was certainly a different calculus. To generate this heat, a cook would burn almost one pound of charcoal. The cost of fuel was a major consideration in working-class families. This use of energy represented up to 5 percent of the budget of a working-class family in Mexico City. It is no surprise that meals in a pot (such as beans, soups and stews), and the quick heating of tortillas on a flat clay or iron pan were the typical ways of cooking. Mexican cuisine was optimized for a relatively high cost of fuel. Today cost is not such a major consideration in our American life and gas (or electricity) is instantly available, but excess use of fossil fuel contributes to global warming. I couldn’t help thinking that maybe I cooked my broth too much; maybe 90 minutes was enough. A family cook in 19th-century Mexico City would have optimized their methods to deal with a scarce world, burned the coals slowly to maximize the heat output; I feel that I (and others like me) should recover that ability.

How did the soup turn out? While the ingredients were my own unique mixture, I preserved the format. On a flat bowl I placed a crunchy slice of day-old bread, topped it with sauteéd spinach and the mozarella balls, and served a soup laddle of broth on top of it. The bread did not lose its consistency, but I found myself using a spoon and a fork. I figured, if this was served in a house of no means, the bread was probably dipped in the broth to save on utensils. It tasted OK; better than I expected. The little amount of broth made a good contrast against the bread, and the layer of spinach and mozzarella added flavor (and nutrients). In all it was a good experiment: a simple, humble meal that connected me to the past.

Dr. Amílcar E. Challú, Associate Professor, History Department, BGSU. Dr. Challú studies the history of living standards and nutrition in Latin America. Some of his publications can be publicly accessed via https://works.bepress.com/amilcar-challu/ and http://bgsu.academia.edu/AmilcarChallu