Luke Nichter, Ph.D. alum from the Graduate Program in Policy History, will have several books released in the coming months:

·         Richard Nixon and Europe: The Reshaping of the Postwar Atlantic Alliance, published May, 2015 by Cambridge University Press.

·         Henry Cabot Lodge, Jr. and the Decline of the Eastern Establishment is now under contract with Yale University Press. This will be the first biography of Lodge, who found himself near the epicenter of so many significant 20th century events.

·         The Nixon Tapes: 1973, co-authored with Douglas Brinkley, will be published September, 2015 by Houghton Mifflin Harcourt. The is the sequel volume to the New York Times bestseller The Nixon Tapes: 1971-1972 (Houghton Mifflin Harcourt, 2014).  A written offer has been accepted for a Mandarin version to be published by the top Chinese academic publisher SDX/Sanlian. 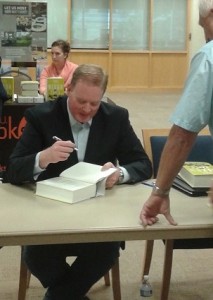 Dr. Luke Nichter signing a copy of his book, The Nixon Tapes