Phi Alpha Theta, the history honorary at Bowling Green State University, recently made a field trip to the Rutherford Hayes Presidential Center in Fremont, Ohio. Meghan Wonderley, a former intern and current volunteer at the Hayes Center, organized the trip, which included lunch at the Fremont Depot, a tour of the Hayes Library with Curator of Manuscripts Nan Card, and a tour of the restored Hayes Home.

Both Wonderley and Joe Faykosh had served as interns at the Hayes Presidential Center before beginning graduate work at BGSU. 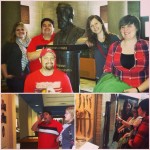 Students learning about the Hayes Center exhibits, and posing in front of the bust of Hayes 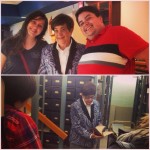 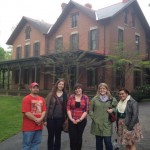 Phi Alpha Theta Members in front of the Hayes House 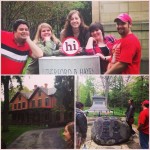 Touring the grounds of the Hayes Center, Spiegel Grove