Sexism in Fast and Furious franchise

The Fast and Furious series is Universal Studios biggest movie franchise of all time and currently the sixth-highest-grossing film series of all time, with a combined gross of over $5 billion. Despite grossing that much money and having rave reviews, the casting hasn’t had too many women in their total cast. The series itself has only had 11 total women in the entire cast for all 8 movie. Including: Michelle Rodriguez, Jordana Brewster, Eva Mendes, Devon Aoki, Nathalie Kelley, Gal Gadot, Elsa Pataky, Nathalie Emmanuel, Charlize Theron and Helen Mirren. The only females that haven’t been killed off, have their character retired or were outside of the main cast are Michelle Rodriguez and Nathalie Emmanuel. The lack of women, centralization of cars and sexualization of cars officially deems this series a ‘man’s movie, a movie showing the manliness of manliness. For example: Dirty Harry, The Outsiders and First Blood(Rambo) are deemed manly movies. (And these movies were deem by this site: https://www.artofmanliness.com/articles/100-must-see-movies/. In an article titled: 100 Must See Movies: The Essential Men’s Movie Library) The series has worked hard to keep the male gaze utilizing only 2 things: pretty women and fast cars. Working hard to ensure the male gaze is key to blockbuster film-making, and the only thing the films fetishize more than cars is women. They’re shot with the exact same suspicious lens, with close-ups lingering over the women body/car as male characters lick their lips in a awe of some sorts. Wether fast cars or fast women, it’s all the same to them. Every film ends with a near-identical montage of random bikini-clad woman displayed alongside or behind our heroes’ beloved cars. At the end of the day, they’re both just trophies.

Even in the movie posters, the women, at least the ones in the main cast, aren’t in front or on top. (I know its blurry but I needed to enlarge it) 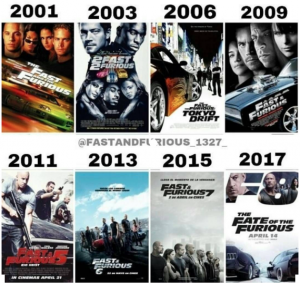 Now I can judge since this movie series is literally my favorite movies ever, but they definitely need to start adding more female characters with real story lines. Even Michelle Rodriguez, who has been the longest lasting female character spoke up about the lack of female characters and threatened to leave if they don’t at least plan to add more dynamic and strong female leads.

“F8 is out digitally today, I hope they decide to show some love to the women of the franchise on the next one, Or I just might have to say goodbye to a loved franchise. It’s been a good ride & Im grateful for the opportunity the fans & studio have provided over the years… One Love.” – Michelle Rodriguez Instagram post from June 27th, 2017.

“I’ve been making movies with Jordana [Brewster], who plays the sister of Dom Toretto for 16 years and I can count on one hand how many lines I’ve had to her,” said the actress. “I think that’s pathetic and it’s lack of creativity.” – Michelle Rodriguez in an interview with Entertainment Weekly

And because of my knowledge of the movies I can literally name each reason why each female character was not permanent in the franchise. (F1)- First movie in Fast and Furious franchise and so on….

Eva Mendes (Customs Agent Monica Fuentes)(F2, F5)- Her character was treated like a stereotypical Latina: having a curvy body, always some male characters trophy of some sort and wearing tight, revealing clothing. Not necessarily relevant to storyline since the Paul Walkers’ character (Brian) stopped cooperating the law enforcement after the second film.

Devon Aoki (Suki) (F2)- was a friend of the Brian’s friend Tej Parker (rapper Ludacris), but was a racer, so I don’t see why if Ludacris was in future films then why couldn’t she?

Nathalie Kelley (Neela)(F3, F7(cameo))- Her character was not featured as a driver or had anything to do with cars. Literally the main character and the protagonist were fighting over her.

Gal Gadot (Gisele)(F4-F6)- Also a racer, yet had her body compared to a car in just the second scene she was in with speaking lines. She was killed off/sacrificed herself in the 6th film to save her boyfriend.

Elsa Pataky (Elena)(F5, F6, F8)- Her character was a cop and ended up getting romantically involved with the protagonist, Vin Diesel’s character Dominic Toretto and had a child by him (who Vin Diesel character named Brian, as a tribute to Paul Walker and his character). Was killed by the antagonist (Charlize Theron) in the 8th film.

Nathalie Emmanuel (Ramsey)(F7, F8)- Still currently in movie franchise, but I don’t know why the ‘traditional Bond-girl bikini slow motion walk scene’ was needed for her character since she was supposed to be portrayed as a ‘hacker’ type.

Charlize Theron (Cipher) (F8)- Still currently in movie franchise. Because she’s the antagonist and she wasn’t killed in the 8th film we don’t know if she’ll make an appearance in the 9th film.

Helen Mirren (Magdalene)(F8)- Still currently in movie franchise. Plays the mother of the ex-antagonists from F6 and F7. (They’re brothers)

This just shows that most if not all had a strong input to this franchise and deserved more than a cameo or a killing off of their character. Despite my love for these movies, Michelle is right. There definitely needs to be more diversity in terms of adding more dynamic female characters with actual storylines.